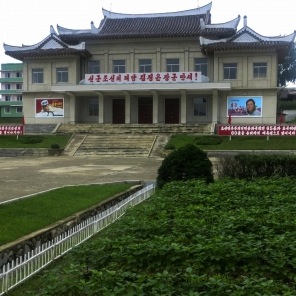 The guide charged with showing visitors around the Korean Film Studio has the chiselled good looks of someone made for the big screen. His face remains deadpan as he watches 20 foreigners emerge from the tour bus, all looking a little bedraggled at the end of the day.

He leads our Koryo Tours group across the vast entrance to the obligatory statue of Kim Il-sung. This one shows the man the North Koreans call the Great Leader with a group of filmmakers, an old-style camera projector to his left, his arm resting on a young girl’s shoulders. 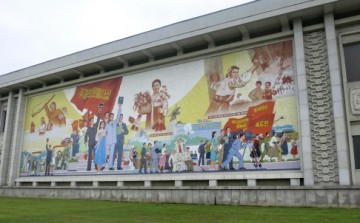 The group is directed to form a line in front of the statue – something we’re getting better at four days into the week-long tour of Pyongyang: we bow in unison and one in the party lays a bouquet of flowers at the foot of the statue.

Standard protocol for visiting any state-run enterprise completed, the tour can begin.

The studio was built in 1947, in the immediate aftermath of the second world war, on the site of a small sock factory 16 kilometres north of the capital.

Taking heed from the Russian example, the impact and use of propaganda was understood early in North Korea and, despite a limited budget, the studios succeeded in rolling out a number of feature films early on, the first of which was My Home Village in 1949.

A drama about a North Korean who escapes from a Japanese-administered prison and becomes an underground operative for the Korean People’s Revolutionary Army, “the film touched the liberated Korean people to the hearts, for it contains the content that because there is the Great Leader Comrade Kim Il-sung, there is the fatherland and native place for our people and a bright future is promised”, according to studio literature.

The film industry got a real boost under the country’s second leader, Kim Jong-il. He visited the Korean Film Studio more than 600 times and offered plenty of “on-the-spot guidance”, a key feature of his legacy. Much is made of Kim Jong-il’s love of films, but it should be remembered that this was also his job: in 1970 he was appointed deputy director in charge of culture and arts in the Propaganda and Guidance Department by his father, Kim Il-sung.

The film industry’s heyday came in the two decades that followed, through the 1970s and 1980s, when some of the country’s best-loved movies were made.

Among them were The Flower Girl (1972), a film version of one of North Korea’s “Five Great Revolutionary Operas”, and Unsung Heroes, a more than 20-hour film series made between 1978 and 1981, whose cast included American defectors James Joseph Dresnok and Charles Robert Jenkins.

Today the Korean Film Studio, designated for feature film production, is still active, but its output is down to about 20 films a year – and some suggest it’s even less than that. It’s worth noting that this complex isn’t Pyongyang’s only film studio. There are several more in the city – the Korean Documentary Film Studio, the Korean Science and Education Film Studio, and the April 25 Film Studio of the Korean People’s Army. But, covering close to 1 million square metres of space, it is the country’s biggest. And it also is the only one which foreign tourists are allowed to visit. 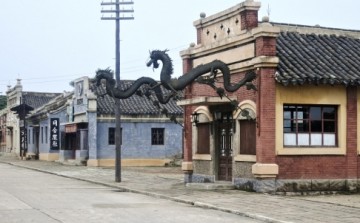 On the day of my visit, a large ancient Korean-themed set is well kitted out for historic films with a temple, old-style houses and a full street scene. The set is eerily quiet. There isn’t a film in production and the guide says the last one wrapped up five days ago.

“It is called The Iron-willed Leader and it took 55 days to make, give or take a few days,” he says, pausing as another guide identified as “Ms Kim” translates into English. He explains that 55 days is the length of time Kim Jong-il recommended for making a film.

This theory as well as other pertinent advice on filmmaking is laid out in Kim Jong-il’s guidebook on movie-making, On the Art of the Cinema. In this veritable bible for North Korean filmmakers, he proclaims that “creative work is not a mere job, but an honourable revolutionary task”.

Strolling through the sets – which include ones made up to look like a 1930s-era Chinese street and a street in Japan – the studio guide loosens up enough that a woman in the group dares to ask: “You’re very good looking – were you an actor?” He’s flattered, almost breaks into a smile, and concedes: “Yes, I was – mainly action films.” “And were you a goodie or a baddie?” she asks. He looks confused for a moment. “A good guy, of course.”

In North Korean cinema, the “baddies” are always Japanese and Americans. And there are two main angles: the anti-Japanese struggle and the anti-American war.

The tour continues through a series of Western-style buildings, presumably an America film set, and along a South Korean street where a couple in the group are quick to spot massage signs, perhaps a dig at the moral laxity across the border.

There is a small café conveniently located at the end of the series of sets and the tour takes a coffee break – and it’s a decent brew, especially well appreciated in a city where good coffee can be hard to come by. A film is being screened on the far wall of the café and a few women in the group briefly swoon at the sight of the actor now known as North Korea’s George Clooney, Yong Ho-ri.

Our guides are asked: is Yong a pin-up for North Korean women? “We don’t have idols,” Ms Kim says. “There are no movie stars – it’s about the character, not the actor.”