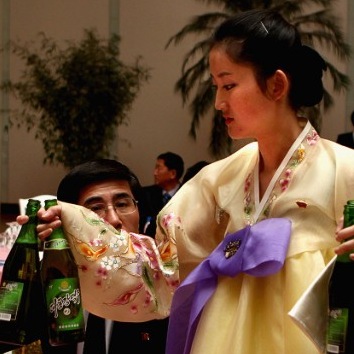 It has the world’s tallest unoccupied building, it puts on the world’s biggest annual show and it’s sometimes prone to petulant nuclear threats. But what else do you know about North Korea?

North Koreans love a pint and have a thriving beer brewing culture.

Taedonggang Beer is one of the best-known local beers. In 2000 the state-run brewery bought up an entire British brewery, shipped it to North Korea and two years later opened for business just outside Pyongyang. North Korea: The unseen view Taedonggang Beer is a full-bodied lager and is named after the capital’s Taedong River.

2. High heels are in

Women love their high heels and many wear four-inch heels day and night, to work, to do the shopping, in the military — we even spotted a woman working on a construction site in a pair. 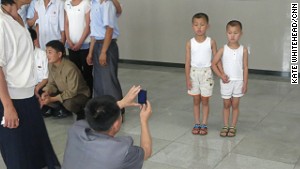 3. You can bring your mobile

Visitors no longer need to leave their mobiles behind. As of January, you can bring your phone into the country and buy a local SIM card from a booth at the airport.

The SIM card allows you to make and receive international calls and call other foreigners in Pyongyang who have mobiles — you can’t call locals as they are on a different network.

A local SIM card for two weeks goes for €50 ($66), but be warned — calls are expensive ($6.60 a minute to call the United States). North Korea’s Koryolink has more than 2 million subscribers. The local cell phones allow all the functions of a regular mobile — make calls, listen to music, take photos — with the exception of access to the Internet. Given the regular power outages, the “light” function on mobiles gets plenty of use.

Most North Koreans can carry a tune and if you ask someone — politely — to sing a song they will probably oblige — on the spot, with no accompaniment.

Pop music is big, especially songs with lyrics. The best-known Western group is still the Beatles — “Hey Jude” and “Yellow Submarine” are high on the list — and Celine Dion and the Carpenters also go down well. No surprise then that most bars have karaoke. The all-girl band Moranbong is the most popular local group. The girls — who were apparently hand-picked by North Korean Leader Kim Jong-un — wear skimpy dresses and belt out pop tunes, the North’s answer to K-pop.

Volleyball is one of the most popular sports and North Koreans often strike up a game in their lunch hour.

The games can be fast and fun, men and women often playing together. The lack of a net is no obstacle and many games start up casually in a car park or any open space. Korean wrestling is also very popular. Behind the veil: Rare look at life in North Korea Pyongyang\’s metro network is reportedly the world\’s deepest. Pyongyang’s metro network is reportedly the world’s deepest. 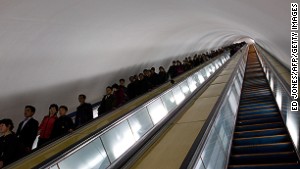 . The Metro is seriously deep

The Pyongyang Metro is 100 meters underground and it takes a couple of minutes to ride the escalator down to the station. The journey is long enough that some commuters sit on the steps — despite the signs asking passengers not to.

There are no advertisements on the walls to distract you on the ride down to the station — just bare white walls. (There are only five advertising billboards in Pyongyang, all owned by the same car dealership).

The underground network has two lines and 17 stations. Inspired by the grand Moscow Metro, many of the stations have ornate chandeliers and paintings and murals on the walls.

Kimchi — spicy pickled vegetables — is the national dish and it’s said that every woman makes a different kind of kimchi.

The dish is time-consuming to make and the traditional recipe requires women to lovingly swirl and smear hot pepper paste over cabbage leaves for hours.

North Koreans seem to have an innate ability to form a line — not a queue, but dead straight lines.

The training begins as young children and by the time they are in their teens a crowd of hundreds can organize themselves into any number of parallel lines, equally spaced, in a minute.

Whether it’s factory workers walking down the street, people gathering to lay flowers beneath a statue of the Great Leader, or soldiers jogging, moving in formation, showing “single-hearted unity” is the order of the day.

And it’s catching. Spend a week touring the capital and your guides will make sure you get give plenty of practice forming lines.

The local currency is the won, but foreigners are not allowed to use it. Instead visitors must use hard currency — U.S. dollars, euros and renminbi.

Bizarrely, given the proximity to China, the Renminbi offers the worst exchange rate. Euros get the best rate at present.

Pyongyang isn’t a shopping destination. North Koreans do most of their shopping in the local markets — there is a blue-roofed market in most neighborhoods, but foreigners aren’t allowed to visit these. Officially, visitors aren’t allowed in department stores either, but this is a rule that is given much more flexibility.

All North Koreans wear a “Kim pin” on the left breast of whatever they are wearing. The pins show a portrait of Kim Il Sung or his son, Kim Jong Il — and sometimes both.

Surprisingly given that everyone wears one — from infants to old folks — there are no shops selling the pins. Instead they are given out sporadically — on special occasions and to mark significant events — and there are lots of different styles. The style doesn’t denote anything, just the period it was given out.

There is a story that North Koreans will be punished if they give a Kim pin to a foreigner, but that’s a myth and they are occasionally given to visitors.