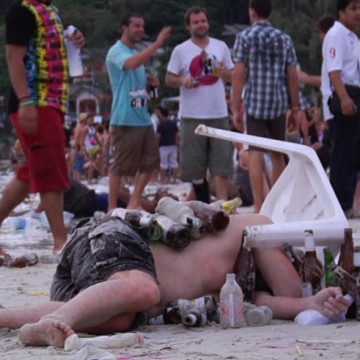 A shirtless Westerner lies unconscious on the beach, empty beer bottles propped up around him while dazed backpackers pick their way through the debris of one of Ko Pha Ngan’s infamous full moon parties.

Plastic bottles, cigarettes and vomit – it’s not a pretty scene, but 30 years ago Haad Rin Beach was a pristine, unspoiled stretch of sand. Pegi Margaret Vail should know – she was there in 1986.

“There were just a few huts on the beach – as a young traveller it was my idea of paradise,” says Vail, an anthropologist and associate director of the centre for media, culture and history at New York University.

She returned years later with her husband Melvin Estrella to film the aftermath of one of the parties for their documentary about the unintended cultural and environmental consequences of tourism around the world.

Ten years in the making, Gringo Trails premiered in New York in October and Vail was in Hong Kong earlier this month for the Asia premiere at the Asia Society. It raises questions that Hongkongers might consider as hundreds of thousands of residents make the most of the festive holidays to travel.

The film opens with an intrepid young Israeli traveller, Yossi Ghinsberg, who set off with a couple of friends to explore the Bolivian jungle in 1981 – and got lost. He survived almost a month in the jungle before being rescued. He wrote a book about his adventure and when it was published a few years later it unwittingly sparked a boom in backpacker travel to the small town of Rurrenabaque.

Hordes of twenty-something backpackers descended on the area, intent on following in his footsteps. Enterprising locals quickly worked out what they were after and how to offer them the “Ghinsberg experience”. Disney-esque boat tours were arranged down the Tuichi River with packages including fishing for piranhas and a handful of local guides all claiming to have been the one to rescue Ghinsberg. 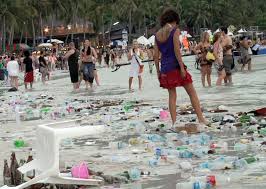 The Ghinsberg example is a good one and raises a number of issues, not least of all the quest for an “authentic” experience. The smart ones, suggests Vail, are the locals who create an authentic experience based not on the reality of their lives, but on travellers’ expectations.

“When I asked Yossi what he was looking for, he said: ‘The romantic, the tribal, the indigenous.’ It’s ideas we get from books, whether it’s Joseph Conrad or another writer. It’s not a recent phenomenon, it goes back to explorers looking at books of previous travellers and romanticising it,” says Vail.

And just as with Haad Rin Beach, the remote corner of Northwest Bolivia was put on the tourist map not by a multinational hotel group or tour operator, but by a lone, intrepid traveller. Travellers talk, swap stories and tips, and word gets out – and today that process is even faster thanks to the internet.

Vail has been bitten by the travel bug – she has visited more than 70 countries and understands backpacker culture. As a young traveller, the first port of call on her six- month Asian adventure was Hong Kong – she stayed at Chungking Mansions. She is quick to make clear she was an independent traveller and not a backpacker.

“‘Backpacker’ indicates a group thing. They think they are being random, but actually they are being random according to the guidebooks’ idea of random – following the institutionalised path. If you stay on that path, you are having mainly the same experience and you are travelling mainly with other travellers.”

As part of Vail’s research for her PhD on the impact of tourism in Bolivia, she asked travellers how much time they spent with other travellers. The answer was a whopping 85 per cent of their time, leaving only 15 per cent to spend with locals.

Lonely Planet came out with its first guidebook in the 1970s and by the ’80s the backpacker phenomenon was in full swing. In those days, the average backpacker was white, from an industrialised nation and a middle-class or upper-middle- class background, but that demographic has shifted.

“Worldwide, there are a lot more travellers from the East, from Japan and especially from China in the past 10 years. They are still coming from the same class background, but their faces have changed,” she says.

Asian backpackers behave in much the same way as Western ones, she says, but they have the advantage of being able to blend in more easily in Asian countries. Some Chinese travellers can pass themselves off as, say, Malaysian, Indonesian or Vietnamese. And in each case, although few want to be an ambassador for community or  nationality, they inevitably are because the people in the places they visit often see them as representative of their country.

Gringo Trails bounces around the world, from South America to Africa and Asia, moving through the various stages of this global phenomenon: from the intrepid traveller to the movement of backpackers en masse, to the later stages where people travel to a destination just to party.

It highlights the impact visitors have on the places they go to. We meet the original inhabitant of an island on the salt flats of Bolivia who is trying to manage the demands of travellers who want to visit while preserving the ecosystem. And we join a group on a snake- stalking tour in Bolivia, where enthusiastic backpackers are reminded not to touch the snakes because the mosquito repellent on their hands is harmful to the reptiles.

Vail hopes that the film will encourage discussion of the impact of tourism, one of the largest global industries and a phenomenon. While it’s already too late for places such as Haad Rin Beach, action now could prevent other places from being unintentionally ruined.

“We need more planning and regulation. People who do have money can partner with those who don’t, but the money should stay local and control should be in local hands,” says Vail.

Most backpackers are young but their motivation for travel differs. Some are driven by a desire to find out more about the world and learn about other cultures, others just want to party. Vail says it’s important for travellers to question their reasons for going somewhere: “Are you going so you can have a party with the same people you can meet back home? Is the place just a backdrop to your party?”

Travellers can also research and plan ahead of their trip, finding out the issues of the place they will visit and the cultural dos and don’ts.

Vail met a guide in Bali who complained that when he told a backpacker he should not visit a site because it was sacred, the visitor shot back: “I can go there, it says so in my guidebook.” The fact that the guide was local and was asking him not to go because it was sacred seemingly counted for little.

“Being a responsible traveller means thinking that if there are too many people going to a particular place, maybe you should go to another place or find someone who can do it ecologically and to spend more if you need to,” says Vail.

Travelling responsibly might mean cutting your trip a little short, so that you can budget for a more expensive but environmentally sustainable and culturally sensitive trip. There are plenty of places worth visiting that are cheap and accessible and that aren’t big party places, says Vail. An internet search will turn up somewhere a little off-the- beaten-guidebook track.

In the film, Bhutan is held up as an example of a place that has successfully navigated the thorny tourist issues and come out on top. By charging US$250 a day for an all-in experience including food and accommodation and limiting tourist numbers, Bhutan effectively appealed to a more mature, responsible and moneyed traveller and sidelined the backpackers. Machu Picchu is another destination that has safeguarded its environment by limiting tourist numbers.

Although Gringo Trails paints an often grim picture of the destructive impact of backpackers, it ends on an upbeat note with Ghinsberg, the Israeli whose book changed Rurrenabaque forever. Ghinsberg returned to Bolivia and is working with the Chalalan Ecolodge in Madidi National Park to raise money for their ecotourism projects.

“Yossi is a good bookend because we could show his influence on the place and travellers going there and also show him being a responsible tourist and going back and working with the community to see their vision through,” says Vail.