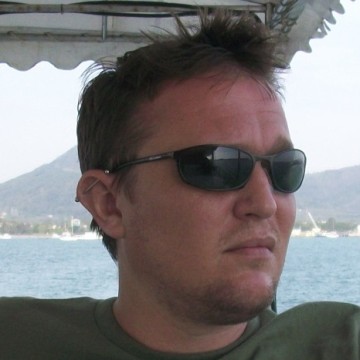 Macau’s $250 million “House of Dancing Water” is famous for magical special effects. But the underwater action you don’t see is even more astounding

Gary Bower, technical director of “The House of Dancing Water.”

“Sometimes I feel that the best show is under the water,” says Bower, of the Franco Dragone Entertainment Group. “You can hear the music and the instructions. The pagoda sinks and the Princess and Jean — the protagonists of the show — sink with it and the divers come out and give them respirators.”

Not only the most expensive show in Macau, “The House of Dancing Water” is the biggest and most spectacular water-based show in the world.

Thirty professional divers are the unsung stars of the show and, like much of the water wizardry that keeps the show afloat, the audience never gets a glimpse of them.

The behind-the-scenes team is double in size of the cast, with 160 technicians, production staff and divers working to make the daring leaps and magic moments possible.

It’s Bower’s job to make sure the twice nightly stunt-packed show at the City of Dreams entertainment complex runs smoothly and safely.

More than 2 million spectators have watched “The House of Dancing Water” since it opened three years ago. 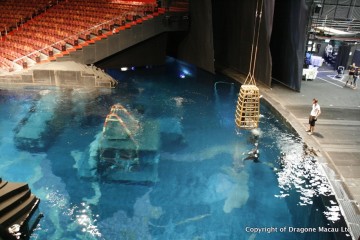 From sea to dry land in a minute

The 85-minute spectacle opens with a tranquil scene — a fisherman paddling his little wooden boat.

Within minutes the sea is churned up, he’s pulled underwater and a huge pirate ship rises from the deep.

Scores of pirates throw themselves off the 10-meter-tall mast and plunge into the water.

There’s a serious amount of water sloshing about, but within a minute of the 26-ton pirate ship submerging the stage is transformed into a flat, dry surface.

Although it’s a 15-level space, it feels intimate. The first few rows are so close to the action that the audience gets drenched several times (towels are provided).

The 10 floors above the stage are for lighting, rigging and a high-tech control room. The five floors below it house hydraulic pumps, stage lifts, special effects and a massive water filtration system and holding tank.

The beating heart of the stage magic is the 11 automated stage lifts that fit neatly together and can be raised a meter above the stage or dropped seven meters below it, creating a pool deep enough for a diver to leap from a 24-meter-high platform.

“Our lifts can hold 26 tons — nobody else comes close to that, they’re the biggest in the world,” says Bower.

How it works: The most spectacular scene

The House of Dancing Water’s tank

One of the show’s knockout moments is the “dancing water” scene when water blasts out of the ground in time to the music. This is accomplished with 258 water jets embedded in the lift lids and illuminated with LED lights.

It’s no mean feat — water and electricity aren’t the best of friends and it takes a huge amount of power to blast water 15 meters into the air.

“We worked with a couple of companies to develop a submersible pump, which is high voltage and insulated to be super safe,” says Bower. “Each pump is 400 volts and offers us the power to push that amount of water through the fountains.”

The audience sees a pool only 21 meters in diameter, but it’s actually 51 meters wide — the rest of the pool is located beneath the seating, where the artists enter (the aqua coulisse), and used for storing underwater props.

The biggest danger for artists is getting disorientated underwater. Due to this, the pool is carefully thought out — there are hookah (scuba breathing apparatus) for air and a network of handrails and color-coded rope lights to mark the four exits.

The 30 divers in the pool, there to help orientate the artists and hand them underwater respirators, are all PADI-certified dive masters, instructors or commercial divers. They wear full face masks that allow them to speak to the artists underwater.

The water is clean for the sake of the artists’ health, but that also means that the audience can see seven meters down to the bottom of the pool.

The House of Dancing Water’s diver

To keep the mystery, masking bubbles are created by pushing compressed air through air effect pods in the floor of the pool. When the power is ramped up, the bubbles come up so fast it creates the effect of boiling water.

“The masking bubbles mean you never see the cast come out of the water or the boat leave, the audience is surprised because that’s something they won’t see on the mainland,” says Bower.

“Most shows in China have a stock stage, but the spectacle you have here, with people flying in and fountains going off, you won’t see that anywhere else.”

Bower says Dragone, the brainchild behind the ambitious show, had a bet with casino king Steve Wynn when the team was in the middle of creating the “dancing water” scene.

Wynn allegedly bet Dragone that he wouldn’t be able to beat him with an indoor fountain show.

“[Dragone] watched that scene and said, ‘Wow, you know what, I think I won my bet’,” says Bower.