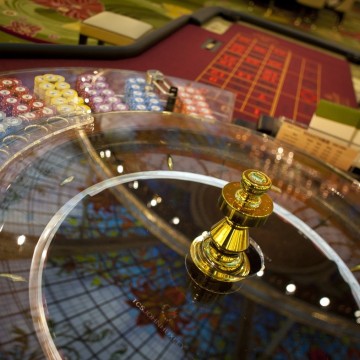 The party never stops in Macau, thanks to 24-hour gambling at all 33 of the city’s casinos.

Amazingly, the city’s casino scene blossomed just a decade ago, when the Macau government ended tycoon Stanley Ho’s 40-year monopoly on gambling in the city

Today, Macau pulls in more than five times the gaming revenue of Las Vegas and business is increasing with more casinos on the way.

In such a crowded market there’s heavy competition to be the brightest and the best, but the main players have each managed to carve out their own niche.

Before you place your bets

The house rules are pretty much the same across the city and casinos offer similar games, with baccarat being the most popular by a long stretch.

Walk through any Macau casino and the vast majority of tables will be baccarat. There will usually be one or two with a big crowd gathered around — these are “lucky tables.”

When a gambler is on a winning streak other punters join in, throwing their money behind him, and the atmosphere can be electric.

Macau has its own currency — the pataca, or MOP — but in the casinos the currency of choice is the Hong Kong dollar.

In fact, some casinos only accept Hong Kong cash. 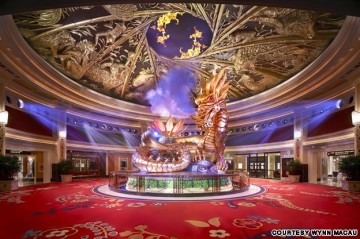 Opened in 2006, the Wynn was Macau’s first Las Vegas-style resort. It expanded in 2010, adding a tower to become the biggest hotel on the Macau peninsula with 1,008 rooms and suites.

That’s small in comparison to the huge resorts on the Cotai Strip, but size isn’t everything — this is one classy hotel.

There’s another Wynn resort under construction on the Cotai Strip that will be much bigger. It’s due to open in early 2016.

The casino: The casino isn’t the absolute highlight of the property. It’s not especially big — 205,000 square feet — but with low ceilings and dimmed lights it’s well suited to those looking for an intimate gambling experience.

The games: Minimum bets on the tables are higher here than other casinos — you’re paying for a well-polished property with great service.

A big draw is the Poker Room that offers No Limit Texas Hold’em and Pot Limit Omaha.

If you’re after the luxury casino experience rather than something big, bold and brassy, Wynn Macau is the one for you.

Hotel: The décor here is contemporary cool with playful elements, such as the moon jellyfish aquarium behind the check-in desk. Watching these ethereal, translucent creatures while you check in can be mesmerizing.

What else? The facilities are outstanding. There are two spas — Encore Spa’s eight treatment rooms each have a Jacuzzi, sauna and shower room and guests can linger a while after their treatment. The Wynn Spa has an extensive list of treatments, as well.

From 11 a.m. until midnight there’s a choreographed light and water show on Performance Lake in front of the property that runs every 15 minutes.

The Venetian isn’t just the biggest casino in Macau. It lays claims to having the world’s largest casino floor — almost 540,000 square feet of gaming space.

The Las Vegas Sands group spent $2.4 billion to build this replica of the Las Vegas original, but added a lot more.

No expense was spared in bringing Venice to Macau — there’s even a Grand Canal Shoppes complete with gondolas, on which gondoliers serenade guests.

The casino: It’s got the world’s largest casino floor, so no surprise that it gets a lot of traffic with a fair number of non-gambling visitors coming just to take a look — 80,000 people cross the casino floor every day.

The games: That massive casino floor is home to more than 500 gaming tables (baccarat, sands stud poker, blackjack, sic bo and roulette) plus more than 2,000 slot machines and electronic games.

The minimum sic bo bet is $300 ($39) and there are 40 tables. For the best odds, according to the Australian floor manager, play craps — but you’ll have to look around for the table, as there’s just one.

The Venetian recently introduced two new signature games, both based on longstanding favorites.

Fast action baccarat is a hyped up version of the classic table baccarat — chips are automated and collected via trap doors built into the table. Mobile chip trays mean dealers can hand out chips to winning bets faster. All this translates into a high-energy game that can be played by up to 60 people.

Dragon elements, launched in May, looks similar to a traditional roulette table but there’s a dragon motif on the table and the numbers on the wheel are sequential.

Bettors can lay their bets before or after the ball lands in the winning slot because the LCD Smart Glass over the wheel turns opaque while it’s spinning and then turns clear to reveal the winning number when the spinning has stopped. The minimum bet on dragon elements is HK$25 ($3) a spin — which makes it an affordable quick thrill.

Hotel: There are 3,000 suites and each is at least 750 square feet with a sunken living room, private bedroom and flashy bathroom.

What else? This was the first of Macau’s casino hotels to focus on entertainment.

It opened with the residency for Cirque du Soleil, but that didn’t pan out (insiders say the largely mainland market has seen plenty of amazing acrobats in China) and it closed last year.

It now focuses on big-name stars and has hosted Lady Gaga and Beyonce.

The connoisseur: City Of Dreams

Located across the road from the Venetian on the Cotai Strip, the City of Dreams targets a different kind of guest.

While families will have a fantastic time at the Venetian, if you’re kid-free and want to have some fun in the casino then City of Dreams is the place for you.

A hot new attraction is Poker Stars Live, which has proved a hit with Asian gamblers. Every two months it hosts Red Dragon, a major poker tournament and the biggest of its kind in Asia.

Gamblers come from more than 60 countries to take part in the action, which costs HK$11,000 ($1,419) to buy in. Poker Stars Live hosts its annual Asian Championship Poker here as well. The next one runs October 18-November 3, 2013.

Hotel: The City of Dreams’ has three hotels. The Hard Rock Hotel, Crown Tower and the Grand Hyatt Macau each have their own distinct personality and offer a total of 1,400 rooms.

What else? The House of Dancing Water is the world’s largest water-based show. Created and directed by Franco Dragone, it’s performed by 80 artists in a specially built 270-degree theater-in-the-round.

For something saucy, TABOO has been taking cabaret to a whole new level since 2012. 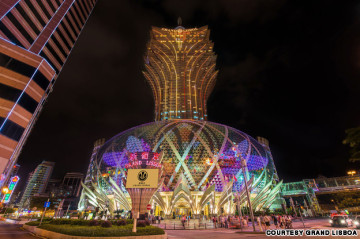 Sitting in a great location right in the heart of the action is the original — Lisboa, just off Avenue D’Amizade alongside its sister property.

At 856 feet the Grand Lisboa is the tallest building in Macau. In September 2013 it was named one of the world’s top 25 skyscrapers.

At night this iconic building is ablaze with lights that constantly change color. The original 12-story casino Lisboa was built in 1970 by Stanley Ho.

It’s known for its lavish design and although the smoky warren of gaming rooms has been renovated it’s still worth putting your head in — you don’t have to look too hard to spot some of the hardcore old-timers.

The casino: With gaming space split over four floors, the casino has more than 430 gaming tables and 730 slot machines.

Leggy dancing girls from the Crazy Paris Show start their performance at 2 p.m. on the main floor of the casino and keep up the Can Can until 2 a.m.

Hotel: The Grand Lisboa Hotel has 430 rooms and suites. For a stunning view of the city, get a room on the 11th floor or above.

What else? Unlike other casinos, Grand Lisboa doesn’t have much by way of entertainment. It does, however, have Robuchon au Dome by the world’s most Michelin-starred chef, Joel Robuchon, and eight other restaurants and cafes.

There’s also a gym and a modest spa.

Given that more than 95% of Macau’s tourists are from Asia, a resort catering to Asian tastes makes sense.

Opened in May 2011, the Galaxy is where you go for a truly Asian experience — it even promotes itself as offering “World Class Asian Heart.”

This is most obvious in the Southeast Asian-themed architecture, such as the Buddhist stupas that top the property’s two towers.

You’ll also see it in the restaurant options and other facilities — all with an Asian flavor.

The games: It might not be as big as the Venetian, but it’s still a monstrous gaming space with a vast expanse of 600 tables offering all the major games. There are 1,500 slot machines with plenty of variety.

The Galaxy lays claim to handing out more million-dollar jackpots than any other Macau casino — so far in 2013 the highest pay out has been HK$21million ($2.7million).

Gamblers in premium rooms get massage chairs and a fleet of London taxis at their disposal.

Hotel: There are three hotels, all keeping with the Asian theme.

The Galaxy Hotel takes up the left tower and the right tower is split between the Japanese chain Hotel Okura and Singapore’s Banyan Tree Hotel, which is the luxury option and offers suites and Pool Villas.

What else? The knockout feature is the rooftop wave pool, the largest in the world. There’s a white sand beach to go with it.

The cinema complex has nine screens including a 3D theater, a nightclub, shopping promenade and spas.

The restaurants offer a range of Asian food, from Japanese, Korean and Chiu Chow to Cantonese and Macanese.