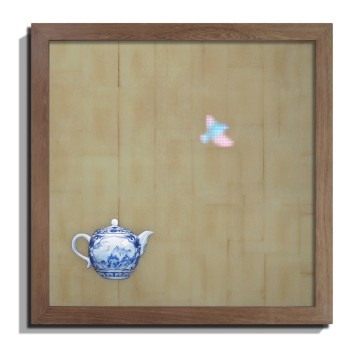 There’s no room for egos at Shanghai-based island6 gallery, where artists work as a team

The long, narrow fish tank in the corner of Shanghai’s island6 Gallery is empty, but a couple of weeks ago it was full of water and a naked woman, completely submerged, writhed about inside. That may sound exotic, but it was just another day in the office for gallery director Jean Le Guyader. All of island6’s artworks are similarly conceived and created on site at the Moganshan Road studio and exhibition space.

“That shoot took a day. It’s a big tank, it took a long time to fill, and we had to make sure the water wasn’t too cold for the model,” says Le Guyader.

Footage of the event has been given an LED light treatment and the ethereal result – Astral Projections – is part of the gallery’s “Through the Wormhole” exhibition that opened on Friday.

Over the past eight years, the gallery has carved a niche in Shanghai’s modern art scene by combining experimental work with LEDs, video, neon and laser art with techniques such as painting and paper cutting.

The way it operates is almost as interesting as the work itself. There is no single artist’s name attached to the work. The gallery operates as a collective – hence the Liu Dao Art Collective ( liu dao literally means “six islands” in Chinese) – and seven or eight people work on each piece: usually a curator, an artistic director, a couple of artists, a cameraman and a model.

The group’s collective method has a curator conceive the framework for an exhibition, write a synopsis of the vision for it and then choose the artists for the project. An artistic director then works with the artists. 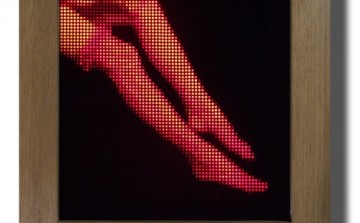 The brief for “Through the Wormhole” reads like a trippy short story, the sort that William Burroughs might have written.

The idea is intended to put everyone on the same page. After that, everything is up for discussion – after all, this is a collective. “That can be challenging,” says Le Guyader. “Someone might have a good idea, but it’s not connected to that show, so it can take a long time before everyone agrees.”

But the gallery wouldn’t have it any other way. Thomas Charveriat, who founded the collective eight years ago, says the process is fundamental to an artist’s growth. This is critical in a city where sales are usually the deciding factor in production; if a picture sells, then why not make another and another, as long as it keeps selling.

“Production should be based on peer feedback, not sales. So many artists spend only 1 per cent of their time actually making art, and the rest trying to sell it. We provide a platform where they can just make art,” says Charveriat.

In the early days, he listed the names of all the artists involved with each artwork. But when galleries bought a work to sell on, they often just took the name of the first artist listed, and dropped the rest. That led to upsets. So now there’s only one credit, island6. “It goes beyond the cult of ego. Careers will be made, no matter what,” says Charveriat.

David Keohane, a sound artist who has been at island6 for six months, doesn’t mind that his name is not visible beside an exhibited piece, although all the artists are recognised on the gallery’s website. The island6 credit carries clout, and creating art collaboratively appeals to him, he says.

“We all have different backgrounds, so we have different perspectives. Someone from a visual background commenting on music gets me out of my tunnel vision about music; you encounter something new that you can use in the future,” he says.

The collective is truly multicultural: Keohane is Irish, curator Margaret Johnson is American, and Charveriat and Le Guyader are French. Others in the collective are Chinese, Polish, Singaporean, Colombian and Chilean. “You’d imagine there would be a lot of clashing and arguing, but actually it’s a lot more symbiotic than you would think,” says Keohane.

Time is a common theme of the gallery, and Johnson, the curator of “Through the Wormhole”, drew on the idea of travelling back in time to the Shanghai of the 1920s. “It’s a very alluring period. The 1920s and ’30s were a time of decadence and extravagance here,” says Johnson.

The exhibition is the 55th for the collective. The Chinese artists do the traditional Chinese crafts – paper cutting, work with rice paper, and Chinese painting. Traditional Chinese rice paper is used extensively. It’s favoured for its detailed texture, and has a transparency that works well with the LED projections.

In one work on rice paper, a detailed paper cut of a Ming-style vase sits in the centre of a square frame; three bright blue LED butterflies flit around it, occasionally coming to rest on the lip of the vase. The contrast between the traditional paper cut and the hi-tech LED butterflies is a quality that marks it out as an island6 piece.

The butterflies aren’t locked into the frame, and flit out of view only to return a moment later. “Most artwork has a border and the art stays within those borders. But here we don’t believe the art has to stay in the frame,” says Le Guyader. An early attempt at producing limited editions went wrong when the gallery discovered a neighbouring gallery offering the same photograph, with the same edition number.

Making each artwork a one-off and providing a certificate of authenticity does away with issues of copying. “If we did limited editions, we would be rich,” says Le Guyader. Installation is as simple as plugging it in. LED is a stable medium, and the works have a long life. Private collectors buy most pieces, a few have been sold to hotels, and brands such as Louis Vuitton sometimes commission them.

Le Guyader is excited about the new exhibition: “We are always looking forward, and we are very avant-garde. So it was interesting to go back in time to old Shanghai,” he says.

A flavour of the island6 style can be found at the collective’s Hong Kong gallery that opened in Sheung Wan less than a year ago. Next month, island6 will open on The Bund, staking out an even more visible presence in Shanghai.