Home / Travel / Where to Drink in Rangoon 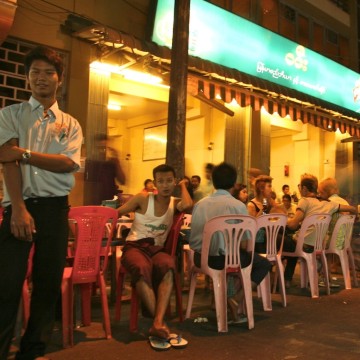 Burma’s largest city, Rangoon, is buzzing and change is in the air—nightlife included. The recent surge of expats, newly affluent youth and a steady stream of tourists all make for fun nights out in Rangoon as long as you know where, and when, to go.

For years, the best bet for a drink in Rangoon was a five-star hotel and these swanky spots still offer good watering holes. The Kipling Bar at the Governor’s Residence (35 Taw Win Road, Dagon Township, + 95-1 229869) is all colonial charm in a tropical setting. For the homesick, Gallery Bar at Trader’s Hotel (223 Sule Pagoda Road, + 95-1 242828) has a clubby feel and a great happy hour from 5-9pm with $3 bottles of beer. But if you want to get away from the tourists and hang out with the people who live in the city—expats as well as locals—there are more options.

The fresh tide of expats following the recent political and social reforms shows no sign of slowing. New to town and keen to make contacts, this crowd of NGO workers, business folk, teachers and diplomats are driving a host of networking nights. There’s a party on almost every night of the week and everyone is welcome.

Tuesday nights are heaving at Pandsodan Gallery (first floor, 286 Pansodan St, Kyauktda, +95 9 513 0846), an art gallery on the first floor of a crumbling colonial building. The owner Aung Soe Min and his Canadian wife have held this open house for years, but it’s really taken off in the last few months. From 7-10pm the beer and punch are free and there’s no pressure to buy the art.

Thursday nights, the place to be is Inya 1 Restaurant & Bar (1, Inya Road, Kamayut Township, + 951 527506). A little out of town, the newly renovated bar is on the first floor of a colonial house, above the restaurant. This isn’t a place for a quiet drink—at least not on a Thursday—come for the buzz and to chat to expats and locals.

Friday night the Strand Bar is where it’s happening. Half price happy hour drinks from 5-11pm make this classy establishment an affordable night out. It’s three-deep at the bar until about 9pm when the crowd moves on. If it’s the first Friday of the month, most will be on their way to the British Club Bar (Alan Pya Pagoda Road), which really gets kicking about 10pm and goes on past midnight. You don’t need to be a Brit to get it, but you do need to show a foreign ID so bring your passport.

Aside from those regular fixtures, there are bars that are good through the week. Taxis are cheap—about $2 to get across town—making bar-hopping easy, but late at night check that the cabbie who offers you a ride hasn’t been drinking, too. 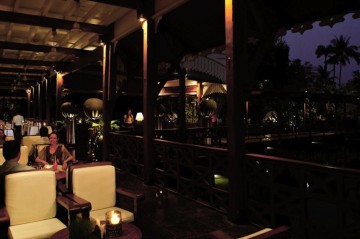 Chinatown’s 19 Street is where the locals go to drink and its packed every night of the week. Restaurants line both sides of the narrow street, chairs and tables set out in front. The beer is cheap at 60 cents a glass for draught, and so are the plates of BBQ. Ordering food is easy—just point at what you want from chicken and pork to fish and mushrooms. Pay a nominal corkage and you can bring along your own bottle (whisky is a popular choice). The restaurants look similar, but locals will tell you some have better food than others and Win, halfway down the street, will not disappoint. Pick a chair facing out into the street and soak up the scene: peddlers, buskers, beggars and Rangoon’s hip-hop royalty all pass by.

Live music at weekends, a western menu and an extensive drinks list have all helped make this a Rangoon institution. The bar is spread over two floors and has high ceilings and a sweeping central staircase. There are original vintage signs on the walls, a darts board and sports on TV. The vibe is friendly and the building, which is more than 100 years old and has an impressive colonial façade, comes with a quirky story: advised by his astrologer that nine was his lucky number, the infamously superstitious General Ne Win had bank notes printed in denominations of nine. The notes were printed in this building in 1988.

This outdoor bar is relatively new on the scene and draws a large, mainly local, crowd. The music is pumping and drinks are served from a palm-thatched shack. The local Myanmar Beer is a favorite, but there’s an extensive cocktail list, too. It stays open until 3-4am and gets rowdier as the night goes on.

If you want to see this classy joint at its buzzing best come on a Friday night, but its just as grand, if quieter, the rest of the week when you’ll be guaranteed a chair and a chance to sink back savor the teak wood paneling and Victorian splendor. With its high ceilings and wooden fans, it has the colonial chic of the Singapore Raffles. Make sure to check out the art on the walls. Prices here are in US dollars and unlike most Rangoon bars you can pay by credit card.

THE BAR WITH A VIEW: Sapphire Bar & Lounge

There’s only one knockout view in Rangoon and that’s of the Shwedagon Pagoda that is beautifully lit at night. For years the Sky Bistro at the top of Sakura Tower was the tourist favorite at which to drink in the view of the iconic gold temple, but the bar is long past its sell by date and the killer vista doesn’t make up for the dirty windows and cheesy decor. A better bet is the rooftop Sapphire Bar & Lounge at the Alfa Hotel. The hotel itself could do with a renovation, but you don’t notice that on the roof and there’s no need to worry about dirty glass—there’s nothing between you and the Shwedagon Pagoda. Six nights a week a Burmese harpist plays from 7-9pm and the rest of the time there’s just the clink of glasses and conversation. It’s a great place to unwind. The bar, which only opened at the end of last year, will close during the rainy season (June through to September).