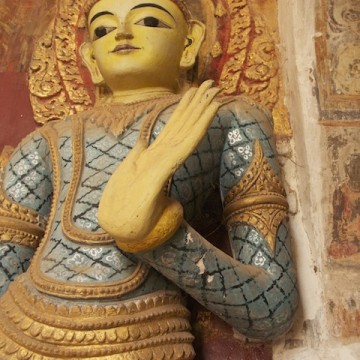 With thousands of ancient monuments to explore, the city of Bagan offers a seemingly endless journey into Myanmar’s fascinating past

The arched temple door swings open. Sunlight spills across the stone floor and catches the gleaming gold knee of a large seated Buddha. An elderly caretaker, his face creased, presses a torch into your hand and slowly pans the beam across the wall. “Twelfth cen- tury,” he whispers. The frescoes cover every inch of this small temple that sits close to Old Bagan’s city walls in Myanmar. Panels of images in muted colours tell the stories of Buddha’s past lives, known as the Jatakas. On the ceiling, Buddha’s footprints are etched in gold. The murals, some so intricate they resemble embroidery, are worn in patches, the paint flaking away to reveal the pale sandstone beneath.

With bare feet on the warm stone floor, you’re trans- ported back 1,000 years to a time when the dusty plain beside the Irrawaddy River was covered with an estimated 13,000 temples, pagodas and various other religious structures. Only about 2,000 structures – not all as well preserved as the Lawkahteikpan Temple – remain of those built mostly between the 11th and 13th centuries. Wealthy adherents of Theravada Buddhism – nobles, soldiers and courtiers – sought to earn merit by building temples, stupas, monasteries and shrines in what was then known as Pagan, capital city of the Pagan Kingdom.

The city’s penchant for temple-building began in the middle of the 11th century when King Anawrahta con- quered the Mon people. Even before the conquest, the king was captivated by Mon culture and in particular its Theravada school of Buddhism. He returned to Pagan with 32 copies of the Theravada scriptures, the Tripitaka, and thousands of prisoners, including religious leaders, artisans and master builders. He put them to work, first building a library to house the scriptures and then a host of temples.

The Mon architects produced temples in their tradi- tion – square, squat monuments with complex brickwork patterns – but towards the end of the king’s 33-year reign a distinct Burmese style emerged. The golden Shwezigon Pagoda is a good example of this, its fluid lines suggesting something more ethereal than the Mon-style temples that preceded it.

The hollow temples were inspired by Buddhist medita- tion caves in India. These temples usually have either one or four main decorated entrances and often feature outer terraces that tend to include intricate frescoes and images of Buddha. A good example of this – and considered among the four great temples of Bagan – is the Ananda Temple. The other three are the Dhamma- yan Gyi, the largest temple; That Byin Nyu, the tallest; and the Gawdaw Palin, considered by many to be the most elegant.

The Ananda, with its whitewashed outer walls and gold-tipped stupa, is easy to spot. Within its central core are four large standing Buddhas connected by a network of corridors, and lining these are more than 1,000 tiny images housed in little niches in the wall. It is definitely worth visiting the Ananda Monastery next door to see the fine frescoes showing scenes from the Jatakas. Originally all the walls were covered with frescoes and today the best surviving examples are on the south-west column of the northern hall.

An inscription left by a 12th-century royal lady who endowed a temple and monastery instructs her descen- dants to maintain the structure, with dire warnings if future generations did not. But even the best efforts of the following generations could not save Bagan’s religious architecture from the disintegration of the Pagan Empire in the late 13th century. The temple-building projects had stripped the plain of its vegetation and topsoil, leav- ing it barren and dry. Rebellions weakened the empire and Mongol invaders under Kublai Khan completed the process. The city that once boasted a population of 200,000 was reduced to a mere village. Two hundred years later, all that remained were an estimated 11,000 monuments from a grander time. Rain and flooding, the raiding of sites for building materials and cultural treasures, and earthquakes had reduced many of the majestic structures to shapeless mounds by the time European colonists arrived in the 18th century.

“In the 1970s in Pagan, there were piles of bricks ev- erywhere, many of the little pagodas and temples had just been flattened by the blast,” says Caroline Courtauld, who visited the site after a major earthquake in 1975. Courtauld, who has written extensively on Burmese cul- ture and history, says even though the whole landscape was much more desert-like than it is now, Bagan still retained its soul. “The atmosphere was hot, dusty and magical; a vast desert of amazing buildings in various states of repair, and very spiritual,” she says.

Part of the pleasure of visiting Bagan today is in ap- preciating the splendour and diversity of the temples and it’s a tour that can be accomplished in just a few days. Some delight with their fine frescoes, others stand out for their green-glazed tiles or the smile on Buddha’s face.

But to savour the spectacle of these fields of ancient temples, you need to gain some height and the simplest way to do this is to climb one. Fantastic views are at- tained from the Shwesandaw Pagoda – it’s so popular it’s been nicknamed the “Sunset Pagoda”. Likewise, the Pyathada – with its wide viewing platform – is another scenic spot from which to witness the sunset. But if you want to avoid the tourist crowds, head to one of the many quieter temples. The five-sided Dhammayazika Pagoda is a great spot at the end of the day and attracts just a handful of visitors.

The real magic of Bagan lies in the freedom to roam and chance upon a remote pagoda. Look out for the gatekeeper who will admit you – and enjoy the thrill as the door swings open to reveal the wonders within.

Bagan was never lost or buried, nor was it completely forgotten. Although a prime target for looters, scholars have found at least 70 instances of restoration projects undertaken in Bagan between 1212 and 1965, many of them by Buddhists seeking merit. After the 1975 earthquake, which registered between 5.9 and 6.5 on the Richter Scale, restoration began in earnest, with French archaeologist Dr Pierre Pichard working with the United Nations and UNESCO to train Burmese conservationists in restoring what they could.

However, there have been differing opinions on how to treat Bagan’s remaining structures. Does one simply conserve what is left or should temples be reconstructed? Can modern materials be used? And would a surge in tourist numbers further damage this ancient site?

“We’ve done reconstruction based on the research on other original temples’ structures,” Naing Win, Managing Director of Bagan’s archaeology department, told international public broadcaster Voice of America. “The new construction cannot be different from the original structure of old temples. That’s why we cannot say that reconstruction damaged the original according to its shape and architecture.”

Efforts at earlier restoration by the Myanmar government have been criticised by scholars and experts, delaying UNESCO’s granting of world-heritage status to the site. As such, Bagan is on a wait-and- see list, but may shortly gain full recognition as a global treasure. That status would not only raise the number of tourists visiting Bagan, but also would help bring much- needed funding for continuing care and preservation of the country’s cultural and historical inheritance.