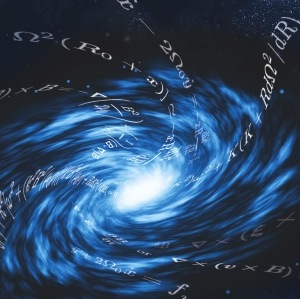 After 23 years, the pair who explained what causes things to fall into the void in space are finally being recognised for their groundbreaking work

We all know what most people do with e-mails telling them they’ve won a million dollars; Professor Steven Balbus wasn’t far from doing the same with the one he found in his inbox in May.

There is good reason the win was unexpected: it had been more than 20 years since the pair’s groundbreaking discovery of magnetorotational instability – a concept that provides a theoretical framework in star formation and for what enables material orbiting a black hole to fall in. The process, called accretion, has widespread applications in astronomy and astrophysics.

“The e-mail said this was long overdue, which was very gratifying,” says Balbus.

He didn’t set out to study black holes. He was interested in the unusual way a magnetised gas moves. It seemed that even a very weak magnetic field would have a big influence over the gas.

But it wasn’t a popular area of research in the late 1980s.

“At the time, people found magnetic fields a nuisance to deal with,” says Balbus. “If you went to conferences and talked about it, people would nod off. But this obscure stuff made a deep impression on me.”

Hawley, his computational-astrophysicist friend at the University of Virginia, couldn’t understand his obsession with magnetic fields. He was more interested in problems with accretion discs – structures of swirling gas that go around a black hole. The big question was: why did the gas go down the black hole?

“Mathematical equations tell you that the gas should go around and around forever, but that’s not what happens. It was a contradiction between what the equations were saying and what nature was showing,” says Balbus.

In summer 1990, Hawley showed him a paper detailing a disturbance to an accretion disc that caused waves to go through. Although it was assumed the magnetic field would have an impact on the wave, because the field was so weak, it was assumed it would not affect the wave.

“Ninety-nine per cent of the people studying the problem would have been happy with that, it sounded reasonable. But not this nerd,” says Balbus.

He was determined to work out the problem from scratch. A few days later, he had set out a long mathematical equation which explained what was happening. It showed that the wave was affected by the magnetic field; but more importantly, it showed an instability that meant if you made a small disturbance – a displacement of the gas – it would keep growing due to the effect of the magnetic field.

When Hawley returned from holiday in August, Balbus told his friend what he had found.

“John raised his eyebrow like Mister Spock in Star Trek and said, ‘I have a code, we can test if this is right or not’.”

Although Balbus had done complex pencil and paper calculations, only a computer programme would be able to work through all the data and possibilities to verify the equation and give an absolute confirmation. Which it did.

Better still, with the support of a new programme, they were able to visualise the results on a computer screen. In 1990, this was a big deal.

The reaction to the pair’s discovery was mixed, says Balbus. Some immediately recognised it as a breakthrough. Others doubted it, then suggested it wasn’t especially important. Regardless, it was widely recognised and cited thousands of times. Their discovery remains to this day the only viable mechanism for the outward transfer of angular momentum in accretion discs.

So why was there no personal recognition for the two professors until now?

Balbus suspects it may have been because astronomers were disinclined to appreciate or embrace very mathematical things. And neither did their work fall neatly into the discipline of physics. It was an astronomical issue, and it fell between the cracks.

“I was hired in a very nice position at Oxford, so I wasn’t working in obscurity. But there had been no recognition of something that had transformed the field,” says Balbus.

Until now. On Monday, the two professors received not just personal recognition, but US$1 million to share.

The money couldn’t have come at a better time for Balbus. Having moved to Oxford with his family a year ago, he and his wife were keen to buy a home, but feeling the pressure of high property prices. The Shaw Prize will help realise their dream.

Meanwhile, his work at Oxford University continues into problems related to disc accretion. He is also focusing on a theory of the Sun’s internal rotation that he’s confident will take off.

“The reaction among the best young people has been exciting, but most old people continue to do it the way they had. It’s a work in progress. I think the future is with me,” Balbus says.