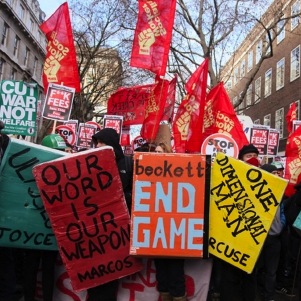 Every protest movement from the suffragettes to Occupy has created objects that demand attention and disrupt the status quo. “Disobedient Objects”, a collection of 99 items at Victoria & Albert Museum in London, is the first exhibition of its kind to bring together examples of art and design created to communicate political messages and to facilitate protests.

The curators have deliberately left space to accommodate one more object, thus highlighting that these protests are ongoing. Perhaps the 100th object will come from the Occupy Central movement in Hong Kong – co-curator Catherine Flood is open to suggestions.

Makeshift gas masks made by anti-government protesters at Taksim Gezi Park in Istanbul, a robot that paints graffiti, and defaced banknotes and coins are among the collection which is on show until February 1, 2015.

Two years ago Flood was beginning work on an exhibition of “Posters of Protest and Revolution” when she was sent to Moscow to help bring down a big V&A exhibition. It was mayhem on the streets of Moscow with people demonstrating against Vladimir Putin standing for re-election. Flood noticed a small design space that had mounted a temporary, one-week exhibition of protest placards and sensed a new project.

“They had recognised a different style of protest in Russia that year – it wasn’t everyone marching under a single banner, there were lots of individual placards, lots of humour being used and much more creativity,” says Flood.

These witty and individually handmade placards marked a new turn in Russian protest. Flood collected a rainbow placard made by a gay rights activist that played on homophobic statements made by Putin. As with all the objects in the exhibition Flood and co-curator Gavin Grindon did all they could to track down the people who had made the objects. In the case of the rainbow placard, the protester has been forced to leave Russia because of his gay rights activism.

The “disobedient objects” stretch back to the late 1970s, a time when struggles against globalisation were emerging as well as the rise of new technologies and the curators have worked hard to bring the objects bang up to date with some recent acquisitions that are hot off the streets. Take the large blow-up silver cube that is an inflatable cobblestone: it was devised by the Eclectic Electric Collective and used in the strikes and protests in Barcelona and Berlin in 2012 – and could be back in action at another protest soon.

As digital technology has escalated in the past 10 years, Flood says it’s interesting to note that the physical objects are still important but they have evolved to work in conjunction with the internet. Take the witty placard from the London 2012 demonstration against government spending cuts. It reads: “I wish my boyfriend was as dirty as your policies.”

“The girl who made it did it the night before. And what’s happening is that people are being photographed with their placards and those images are tweeted and put on Facebook, so the whole design of a placard is like a cardboard tweet,” says Flood.

Gone are the days when a group could spend days discussing the design of a poster and then even longer getting it printed. Now objects can be created much faster and transmitted quickly thanks to the internet.

One of the big challenges was working out how to present objects that felt more at home on the street than the hallowed halls of the more than 150-year-old V&A. Flood had decided early on that she didn’t want the exhibition to be too text-heavy, so although the objects have labels – grey ones written by the curators and yellow ones written by the people who made and used the objects – the spotlight is on the protesters. The aim is to show these are regular folk driven to action.

“It shows that design is not just a commercial process or professional activity, but that ordinary people can take design into their hands and instigate change,” says Flood.

Alongside each object is plenty of television footage, video interviews and music. You can easily spend two hours wandering around the exhibition, drawn into the political and often deeply personal stories.

While the objects are wide and varied and from all over the world – Europe, North America, Mexico, South America, the Middle East and Asia – they have all played a real-life active role in a social movement. And all have been successful in one way or another.

Take the folk art textiles – or arpilleras – which are patchwork pictures handmade by women. Originally from Chile, these have spread to other Latin American countries and beyond.

One of those in the exhibition was created by a woman who had survived a massacre in a small town in Colombia in 2000.’

“The women sold the arpilleras so they provided economic support, but by coming together in workshops and feeling in a safe enough environment to start recording what had happened to them gave them a lot of power, too,” says Flood.

Other “disobedient objects” have been so successful they’ve been copied by groups around the world. The book bloc shields – banners and shields made to look like books – were first used in Rome in 2010 by Italian students demonstrating against cuts to education and using shields decorated as giant books. Then students in the US and Britain saw news footage of the protest and began making similar ones.

News footage of police striking the shields with batons – as though they were destroying books – made for evocative media images.

“The footage of students in London and Manchester using the book bloc shields was seen by the Italian students and created a sense of solidarity even though they’d never met. It’s not simply about winning a particular campaign, it’s about how a design goes viral and is picked up,” says Flood.

And even though the Russian who made the rainbow placard failed in the sense that Putin was re-elected and he had to leave the country, his work can still be seen as a success. “He got out there and made that statement and that’s really significant,” Flood says.

“A lot of the time it is about a group of people coming together, becoming politicised and supporting each other.”

Alongside “Disobedient Objects” is a smaller, complementary exhibition based on Victoria & Albert’s permanent collection, “Posters of Protest and Revolution”.

Unlike “Disobedient Objects” these posters are not all from grass-roots protest movements. The exhibition – which ends on November 2 – covers a broad range from anti-Vietnam war posters to North Korean propaganda.

There are posters where the focus is negative text – the big “anti-movement”, based on the idea that it is much easier to galvanise support by getting people to agree on what they are against rather than what they are for.

“Posters have been a category of object that museums have collected since the end of the 19th century because amazing artists like Toulouse-Lautrec thought ‘we don’t want to be just displayed in galleries, if we do posters it means we’re out on the streets, interacting with the environment’,” says curator Catherine Flood.

And so the tradition of museums collecting posters was begun although other protest objects were ignored – until now.