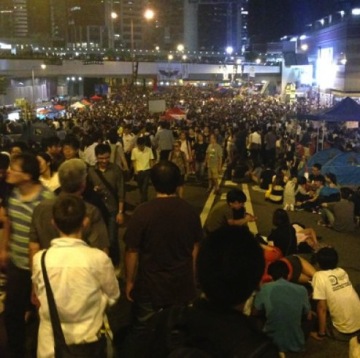 HONG KONG – Michael Chan had never given much thought to politics until two weeks ago when he saw footage of police using tear gas on a peaceful student demonstration. Since then the 33-year-old Canadian has spent every night at one of the Occupy movement’s protest sites.

“I’ve been coming for nine to 15 hours a day, I’ve lost a lot of weight, but it’s important that we are here to help protect the students,” said Chan, an actor, who was among the thousands of protesters who joined a mass rally on Friday night.

The number of protesters had been dwindling over the last four days as many students returned to school and university and others to work after the long public holiday, but tonight they were back in a show of force after the Federation of Students called for the mass rally Thursday. Disappointed with the government’s decision to cancel a meeting with the student protest leaders that was scheduled for Friday, Lester Shum, vice-secretary general of the Federation of Students, called for the tens of thousands who joined the Occupy movement to meet at the Admiralty protest site, now known as “Umbrella Square.”

“The government was supposed to meet the students and they bailed on us – that was insulting and shameless. It challenged us to come out tonight and look how many people are here,” said Chan, who holds a Hong Kong ID card and considers himself both 100 percent Canadian and 100 percent Hong Konger. 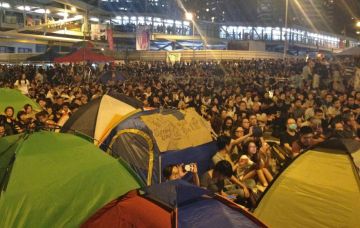 The crowds began gathering at 7.30 p.m. on Harcourt Road to hear a series of speeches by Occupy Central, the Hong Kong Federation of Students and Scholarism, beginning with a rallying cry, “Critical moment, long term occupy!”

First up on stage were some of the volunteers who have helped keep the movement running – the medical teams and those who have worked to keep the protest sites clean. Then came a group of actors and artists to show their solidarity with the protesters. By 11 p.m., the crowd of about 3,000 had swelled to an estimated 10,000.

Radical lawmaker Leung Kwok-hung – known as “Long Hair” for his trademark locks that have been cut after a recent stint in jail – and Democratic Party Chairwoman Emily Lau made speeches and the last word of the evening went to student leader Joshua Wong. He said the protesters would refuse to leave the Admiralty site unless the government offered an apology and encouraged protesters to stay at the site overnight.

Standing beside a row of pitched tents a little later in the evening, the 17-year-old founder of the pro-democracy student group Scholarism said he was encouraged by the turnout.

“I’m optimistic – look how many people have come tonight. Many people have brought tents with them, they plan to sleep on the street. It is good for the long-term prospect of the movement,” said Wong.

Among those bedding down for the night was Labour Party Chairman Lee Cheuk-yan. He lay down in a blue tent and posed for photographers after calling for protesters to spend all night at the Harcourt Road site.

Twenty-year-old Stef Lo came to the site with a group of friends determined to sleep out after hearing yesterday’s announcement of the cancellation of talks. She said she was further incensed by the news that Chief Secretary Carrie Lam and many senior government officials would leave Hong Kong Saturday for a development forum and trade fair across the border in Guangzhou.

“Carrie Lam is just trying to escape from the people, she is out of control. If the Student Federation can keep maintaining the movement and keep people here then we will succeed,” said Lo, who has spent the last 10 days at the protest site, returning home each day to shower and change her clothes.

It was government decision to back out of the scheduled talks that also persuaded Jordie Shiu and his girlfriend to attend the rally.

“I am very disappointed. Carrie Lam cancelled the talks because she is afraid to face the citizens and now she and all the top government officials are leaving town – we can’t accept this, we must do something,” said 32-year-old Shiu who came prepared with a gas mask should events turn violent.

By almost 2 a.m., the majority of the protesters had returned home to bed, but a hardcore group remained with about 100 tents pitched on the highway. In Causeway Bay, the other protest site on Hong Kong Island, where protesters had been watching the rally streamed live onto a large screen, a smaller number were camped out for the night.