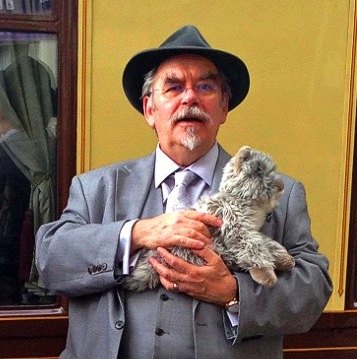 (CNN) — It’s only as I’m inviting my friend to lunch that I realize the prospect might not sound that appetizing.

Surprisingly undeterred, he agrees to meet me at London’s Victoria Station the following week and it’s only once we’re standing on the platform amid a rapidly swelling crowd that he starts to look a little worried, nervously asking: “Who are all these people?”

We’re being joined by a diverse crowd on our lunch date, which is probably only to be expected since we’re booked in for an afternoon of fine dining with an extra helping of homicide.

That’s the menu on board the Murder Mystery Lunch train, a luxury rail ride around the English countryside that pitches passengers into a cloak and dagger world worthy of Agatha Christie — but with greater quantities of champagne.

Many of our fellow diners — some celebrating anniversaries or birthdays — are entering into the spirit, dressed in 1920s flapper dresses, gangster suits or as extras from “Downton Abbey.”

It’s hard to say whether the passing commuters are doing double takes at this oddly attired throng or at the train: the magnificent Belmond British Pullman.

This king of the railroad is — appropriately for a trip that’ll involve murder — a sister to the Orient Express and its 11 gleaming carriages that channel the spirit of a golden age of travel.

Amid this eccentric crowd, a portly gentleman dressed all in gray stands out more than others.

What the butler saw.

What the butler saw.

The double-breasted suit, the hair, the hat are gray. As is the cat cradled in his arms which, he tells us with a perfectly straight face, is called Pussy.

“Pussy isn’t real, you do realize that?” says Mr. Gray as I tickle his stuffed feline under its chin.

Mr. Gray is the first of a string of actors we meet, each stopping by like an old pal for a chat, exchanging cheeky repartee and dropping clues.

Before we can meet any more of the cast, we’re shepherded on to our carriage.

On the table, between the silverware and crystal-cut wine glasses, is a sheet of paper — one side is printed with an incomprehensible set of clues, the other is blank for us to take notes.

There’s also a section for us to name the suspect and their motive.

After all, this afternoon isn’t just about getting tipsy before sundown — there’s a murder to solve.

We don’t have to wait long for the killer to strike.

The train has barely left Victoria Station when a woman stumbles into our carriage and declares, “I’ve been stabbed!” 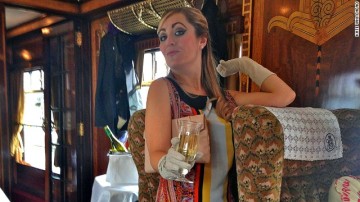 She screams, flails about and then staggers out the carriage, giving us a good view of the dagger sticking out of her blood-splattered back.

We have our victim.

The stabbed woman’s cries can still be heard as a dashing young man called Matt storms into the carriage, shoves a gun in my face and shouts: “There’s been a murder. Don’t panic!”

It’s hard not to laugh.

At times the acting is as hammy as a deli counter.

There are, however, more somber moments along the journey when we get to question characters, including a detective, a newspaper reporter and the head of British intelligence agency MI5, about what’s going on.

The champagne makes it easy to slip into this whodunit on wheels.

Bubbles before noon always feels decadent, but the added buzz from the mix of murder, mystery and a 170-mile journey quickly goes to the head.

“Don’t bother looking out the window, it’s the same view as on the cheap train,” quips the train manager as he passes through the carriage making polite conversation.

We mistake him for one of the cast and begin grilling him on the murder before realizing that he is in fact the real train manager.

Despite what he says, it’s worth taking in the view as the train rolls through the county of Kent, a rural corner southeast of London known as the garden of England because its rolling landscape of farms and coastline has long supplied some of the country’s best crops.

Back in the carriages, lunch arrives and the waiting staff appear to be in on the game, making quips about the suspects without letting anything slip.

The five-course meal that began with murder finishes with a cheese platter.

By now everyone is putting forward their theories, some wilder than others, in the hope of winning a take-home bottle of champagne.

An enthusiastic young American comes up with an elaborate theory involving a tin of paint that surprises the world-weary detective.

“I’ve been doing this six years and I’ve never heard that one,” he remarks.

An older honeymooning couple, both on their third marriage, have conflicting suspicions.

She thinks it’s Mr. Gray’s daughter, he suspects the head of MI5, but each group can only nominate one suspect.

He backs down and goes with her suggestion — a man with the wisdom of two marriages behind him.

By the time train slips back into Victoria Station everyone is swaying slightly as though disembarking from a boat.

The young American wins the champagne — nothing to do with paint — and farewells are said as though we’d shared a life-changing event.

And we had: we dined, we drank and someone died.