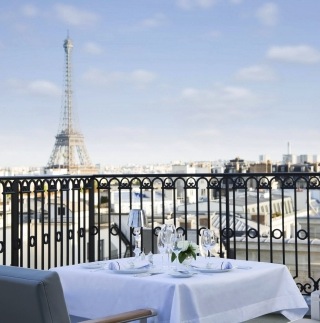 The Peninsula has been a familiar name in Hong Kong, a byword for luxury, and now, for the first time, that name can be found in Europe

A Peninsula in Europe? Yes! Since 1928, The Peninsula has been a familiar name in Hong Kong, a byword for luxury, and now, for the first time, that name can be found in Europe. The Paris hotel is massive – it runs the whole length of Avenue Kleber, just a stone’s throw from the Arc de Triomphe – and occupies what was once one of the city’s most glamorous belle epoque buildings, the former Hotel Majestic. The renovation took four years; twice as long as it took to build the original hotel.

Why so long? There was a lot to be done. The building was bought by the French Ministry of Foreign Affairs in the 1930s and, let’s just say, the French government didn’t spend a lot on maintaining the almost 100-year-old property. But The Peninsula Hotels – and its Qatari partner – did, splashing out a cool US$580 million.

Where did all the money go? On the 20 master masons who sandblasted the exterior limestone walls; sourcing the fish scale-shaped tiles for the roof; excavating the basement to make room for a spa and a car park; painstakingly removing paint and applying 40,000 pieces of gold leaf – and that’s before we get to the artwork and plush guest rooms, yet.

Such an old building must have a history … If walls could talk, these ones would have a few tales to tell. In 1928, George Gershwin wrote An American in Paris while staying at the Hotel Majestic and, over the years, Pablo Picasso, James Joyce and Marcel Proust all hung out here. During the second world war the building served as headquarters for the Nazi military command in Paris and, in 1973, the United States and Vietnam signed the Paris Peace Accord in what is now Le Bar Kleber.

Enough of the old stuff, what’s new? The rooms are twice as big as they were in the Majestic days, the 400-room hotel having been converted into 200 rooms and suites. And although en-suite bathrooms were a big deal in the old days, now it’s all about the technology. Guest rooms are seriously hi-tech, with not just one iPad in each, but a number of tablets dotted about the room. There’s even a nail dryer in the dressing room and a proper walk-in wardrobe. 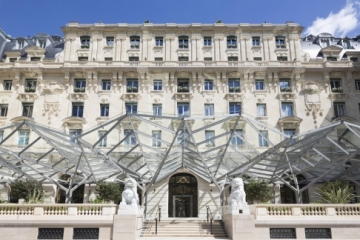 What about the food? The Peninsula’s executive chef, Jean-Edern Hurstel, is a minor celebrity in France after having competed in a MasterChef-type television show, and there are plenty of restaurants to choose from, the best being arguably the rooftop bar and restaurant, L’Oiseau Blanc. It’s more casual than the others and you get a 360-degree view of Paris, including the Eiffel Tower, which goes all bling after dark, flashing gold on the hour from 8pm.

Wasn’t L’Oiseau Blanc a plane? That’s right, clever you! It was a biplane that disappeared during an attempt to cross the Atlantic in 1927, 12 days before Charles Lindbergh’s successful solo flight. The wreckage of the plane has never been found but a replica of “the white bird” is suspended over the hotel courtyard.

Isn’t there an aviation-themed bar at the Hong Kong Peninsula? Yes; Michael Kadoorie, chairman of Hong Kong and Shanghai Hotels, which owns The Peninsula, has a thing for planes. The China Clipper lounge, named after the flying boats that once flew between the US and the city, is at the top of the Hong Kong Pen. Other themes link the properties; the Peninsula Paris also has two large stone lions standing guard outside the hotel and its bellboys wear the classic white pillbox hats and uniforms.

I bet all this doesn’t come cheap. It doesn’t – room rates start at €795 (HK$8,000) a night. For further details visit paris.peninsula.com