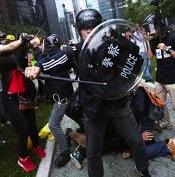 Sales of consumer durables surged 67 percent, distorting the overall picture. This massive increase was attributed to the release of new iPhone models. The biggest drop was seen in jewelry, watches, clocks and valuable gifts, down 11.6 percent from last year. Clothing also dropped 8.8 percent.

“The performance of items closely related to local consumption was lackluster, conceivably reflecting the adverse impacts of the Occupy Movement on consumer sentiment,” a government spokesman said.

“After excluding the boost from the surge in sales of consumer durables goods due to the launch of new smartphone models, retail sales actually slackened to show a year-on-year-decline in October.”

He said that retail sales performance in the near future would depends on the impact of the protests on local and visitors’ consumption sentiment, adding that the situation would continue to be monitored closely.

On Sunday night and into the early hours of Monday morning, police used pepper spray, batons and water hoses against the protesters in clashes that took place outside government headquarters, a short distance from Connaught Road in Admiralty that the protesters have been occupying for two months and close to two large shopping centers.

Luxury carmaker Audi wasn’t taking any risks in the aftermath of the unprecedented violence. Located on the ground floor of Admiralty Centre, 18 Harcourt Road, a stone’s throw from the protester’s tented encampment, Audi management decided to not to open its 12,000-square-foot flagship on Monday.