Home / Health / How meditation can improve our health and happiness 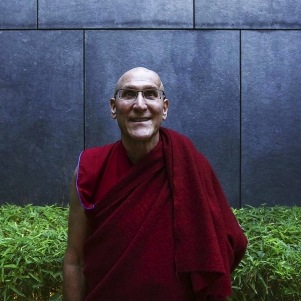 He then moved east, and has lived in Dharamsala, India, for more than 25 years. “I used to tell people I wore two hats – I would first look from the doctor’s perspective, and then look from that of a monk or meditator. But now the two have merged,” says Kerzin.

Eastern traditions, he says, teach us how to connect with the present moment and become happier, healthier and more balanced. City dwellers in search of fulfilment and meaning in their lives can find a lot in these traditions, he says.

“The phenomenal momentum of Hong Kong life fuels stress and pressure, and the possibility of a burnout is ever-present. It is rare if a person doesn’t feel this pressure.

“Citizens are pushed to achieve from the earliest age, at the expense of mental health and emotional well-being,” he told a packed house at the Asia Society in Admiralty last week.

Meditation offers a way of connecting with the here and now, as our minds are unstable – “jumping around like a monkey mind” – as we worry about the past, or plan for the future.

The practice of meditation enables us to focus our minds and bring about more stability, allowing for a clarity and crispness of thought. It puts us squarely in the present moment, where we are able to nourish and invigorate ourselves. The health benefits of meditation are impressive, he says.

“People have fewer heart attacks, blood pressure goes down and sugar levels from people with diabetes go down when we drop into the moment. It makes you feel whole and so helps reduce the tendency for depression, anxiety, stress and fear,” Kerzin claims.

Kerzin points to new research into diseases such as arthritis that show meditation has positive benefits. Researchers suggest it’s because arthritis is linked to the immune system, which meditation has been seen to support.

“Research published in respected peer review journals shows that IL 6 – or interleukin 6, a natural chemical in the blood – is related to our immune system. Meditation and positive mental states over time help strengthen our immune system,” he says.

In cases where an illness can’t be cured, meditation has been shown to help improve a patient’s relationship with their illness. There is a tendency for the chronically ill to get depressed, angry or upset, but regular meditation improves their sense of well-being and ability to manage pain.

Meditation sounds easy. After all, it’s just a matter of sitting still, your hands in your lap, and breathing. But those who have tried will know it takes some self-discipline to crack.

Kerzin recommends two types of meditation for the beginner. The first involves concentrating on the breath. It isn’t necessary to sit in the lotus position. If your knees ache or you find it uncomfortable sitting on the floor, sit in a chair.

The main thing is that your back must be straight. Put your hands in your lap, drop your gaze, close your mouth and breathe through your nose slowly, concentrating on the tip of your nose.

He also suggests beginning with a five- to 10-minute meditation. Don’t watch the clock, just meditate for as long as feels comfortable, and finish while you still feel fresh. Over time, you can extend your meditation. But the main thing is to do it every day.

Walking meditation is also a good one to begin with. This is ideally done barefoot, walking on sand or grass. As you take very slow steps, arms by your sides, concentrate on your feet.

This walk isn’t about getting anywhere. Your movement is very slow and deliberate, and if you succeed in placing your focus on your feet, it will immediately relax you.

There’s a lot more going on in meditation than simply chilling out. Long-term meditators have been shown to fundamentally change the shape of their brain. It sounds far-fetched, but Kerzin was part of the study that looked into this.

The findings went against everything he’d been taught at medical school, where he was told that the brain of a fetus changed significantly in the womb and continued developing in the first few years of life, but stopped in very early childhood.

“Now we are finding that actually that isn’t true. There is a tremendous amount of change that happens and much of it is under the influence of our emotions, our thoughts and our experiences in life,” says Kerzin.

His brain was studied as part of research on long-term meditators at the University of Wisconsin, Madison and Princeton University.

He and 10 other meditators had all clocked up at least 10,000 hours of meditation practice, and many had reached 50,000 to 60,000 hours, having done at least one three-year retreat.

The results showed that the prefrontal cortex is larger in long-term meditators compared to non-meditators, and also that there is more blood flow and metabolism in this area.

The prefrontal cortex is the area of the brain that is known for “executive function”. It is the region for planning, reasoning and imagining, and it controls the highest level of thinking.

It is also associated with our ability to relate to people, and have genuine relationships and empathy, he says.

He is in Hong Kong for a month until March 7 as visiting professor at University of Hong Kong.

Kerzin is the founder of the Altruism Medicine Institute, a non-profit organisation that seeks to understand, through scientific research, how altruism and positive mental states can bring about good mental and physical health.

The institute provides training for emotional well-being – “emotional hygiene” – which is about cleaning the destructive emotions. These are anger, jealousy, pride, selfishness and miserliness, he says.

For those with a tendency to nod off when meditating – not uncommon in first-timers – Kerzin recommends adjusting the room temperature so it is a little cooler. If you tend to jump about when you try to meditate, a slightly warmer room will help calm the mind.

He sees people searching for happiness by collecting material things, wealth and pleasure, but says that won’t bring about a lasting happiness or peace, as these things are limited to the sensory level or our experience.

Meditation allows us to reach a deeper mental level and more contentment, he says.