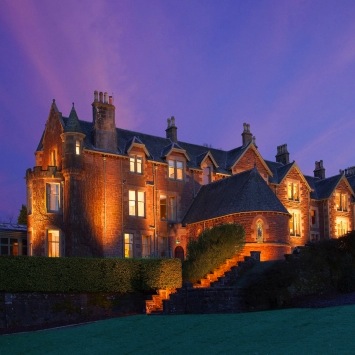 Why would a grand turreted mansion have a bright purple and green tennis court out front? This is sporting legend Andy Murray’s new Scottish hotel. The Eden family ran Cromlix House as a hotel for 30 years before they put it on the market in 2013. Murray, whose hometown of Dunblane is just 5km down the road, snapped it up. After a year of renovations that gave it some much-needed modern touches without losing the old-world feel, Cromlix Hotel opened last year. Purple and green are the Wimbledon colours – the only nod to the new owner’s day job.

What do tennis players know about hotels? A fair bit, I’d have thought. For starters, they spend most of their time on the road, staying in five-star digs. Besides, Murray isn’t the one calling the shots here, that’s left to Inverlochy Castle Management. The Scotsman isn’t the only tennis pro turned hotelier. In 2013, Rafael Nadal invested in two resorts on the island of Cozumel, in Mexico, and former world No1 Juan Carlos Ferrero opened Hotel Ferrero in Spain in 2007.

First impressions? The long tree-lined drive up to the castle-like Victorian mansion sets the scene. Arriving in winter, when it’s dark by 4pm, the mansion’s lights are a welcoming sight and new arrivals are barely out of the car before someone offers to help with their bags. Then they’re whisked into an opulent reception room with dark wood panelling and dripping with antiques.

What are the rooms like? Cromlix is a truly boutique hotel – there are just 10 bedrooms and fives suites, each of which is named after a famous Scot who has, apparently, inspired Murray. These include the Burns Suite, the Eden Suite and the Carnegie Suite, which remembers industrialist turned philanthropist Andrew. They are each several times larger than your average Hong Kong apartment – and decadent. Beds are huge, deep soaking tubs are designed for two and the curtains are luxurious, thick drapes (peek out and you can see Murray’s purple court). Despite all the old-world Scottish charm, the technology isn’t lacking, with iPod docking stations and televisions cleverly disguised as gilt-framed mirrors.

Anyone for tennis? Of course, and there is plenty else to do – especially if you’re into the great outdoors. For the super keen there’s game shooting (pheasant, grouse, partridge, hare or pigeon) and deer stalking. There are trout in the loch and fishing rods available if you want to try your hand at catching one. For those not keen on killing things, there are more gentle garden pursuits, such as croquet and archery. 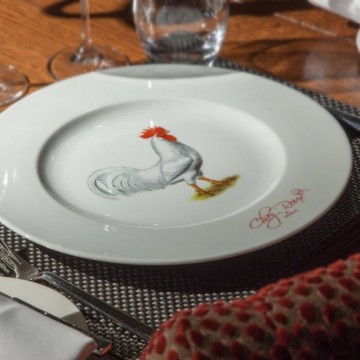 What is the highlight? At this time of year, the real log fires are a big hit. And the games room, complete with a huge pool table and stocked with classics such as Cluedo and Monopoly, is sheer joy. But to die for is Albert Roux’s twice-baked cheese soufflé in cream. The French chef oversees the restaurant and the soufflé is a Le Gavroche classic; it’s so good it would be worth walking the 700-odd kilometres from the London restaurant – established by Roux and the first in Britain to be awarded one, two, then three Michelin stars – to the Cromlix for.

Any other surprises? In the centre of the house, there’s a beautiful, small family chapel with exposed wooden beams, stained-glass windows (above) and drums that once belonged to the Royal Scots Guards strung from the ceiling. Jamie Murray – Andy’s older brother and also a tennis pro – got married in the chapel in 2010 and it’s rumoured this might be the spot where Andy and Kim Sears will tie the knot this year.