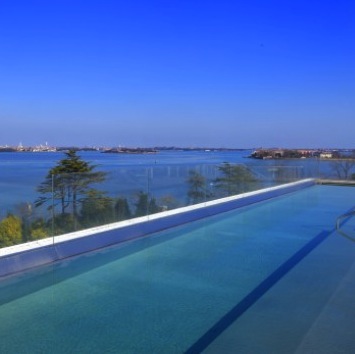 What is it? A brand new 266-room hotel on its own island (below) within the Venice lagoon. Isola delle Rose is an artificial island, built in the 19th century, and JW Marriott spent several years transforming what had been a sanatorium before the hotel opened in March.

It all sounds very James Bond. Arriving at the resort is totally 007 – well it is if you eschew the free hotel shuttle and splash out €80 (HK$705) on a water taxi from Venice railway station. That sounds expensive for a 15-minute ride, but it is worth it. With the wind in your hair, once the boat has left the Grand Canal and the throttle has been opened, it is a thrilling cruise into the hotel’s private entrance, where a clutch of staff will whisk away your luggage and lead guests through the check-in formalities. If the hotel had been open last September, you can be sure George Clooney and Amal Alamuddin – or at least some of their wedding guests – would have stayed. 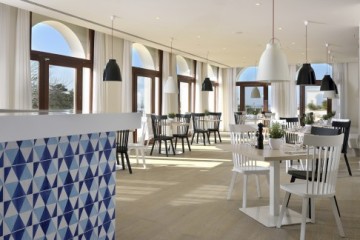 Don’t you feel isolated from the Venice buzz? Have you been to Venice recently? The place is heaving with tourists and is a veritable forest of selfie sticks. After an afternoon of sightseeing, it’s a relief to get on the hotel launch from St Mark’s Square. It’s only a 20-minute ride, so you can nip back out for dinner.

Isn’t there anywhere to eat on the island? Of course; the hotel has four restaurants and four bars. The posh Dopolavoro Dining Room, which is in an outbuilding a five-minute walk from the main block, is on the very steep end of pricey and the reviews have been mixed. More affordable is the Sagra Rooftop Restaurant (above), where the food is pitched as simple Italian fare – and it is just that; a little more flavour wouldn’t have gone amiss. Cucina Daily Restaurant only serves breakfast and does an excellent job of it.

How big is the island? It’s just 16 hectares and much of it is filled with gardens, fruit orchards and an olive grove, which all make for pleasant strolls. If there are any roses – the flower that gives the island its name – they are well hidden. Built in the 1920s, the sanatorium looked after people with breathing difficulties. The sensitively reimagined buildings are the kind you might expect to find in an elegant seaside resort of that era. Most of the guest rooms are in the main building, but villas – with gardens – have been built in the outhouses.

What is the highlight? There is a spa (above), run by the Bangkok-based Goco Group and a few minutes walk from the main building, but hands down the best part of this hotel is the rooftop infinity pool (top), with its 360- degree lagoon views. Having a dip here as the sun rises over Venice is a special kind of treat. The Sagra Poolside Bar is a great spot for sundowners – as long as it doesn’t rain. Unfortunately, one downpour is enough to close the whole venue for the rest of the day, which seems an oversight.

What’s the bottom line? Rooms (below) start at €505. For more details and reservations, visit www.marriott.com.