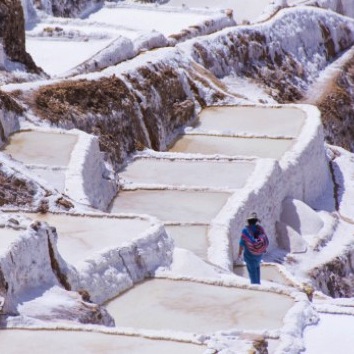 Escape the tourist throng at Inca ruins, and support a site that provides a good living for its workers

Tourism in Peru is focused on a handful of star attractions – Machu Picchu, the Nazca Lines and Colca Canyon tend to hog the limelight. The Inca citadel in the sky alone attracted a whopping 1.2 million visitors in 2013 and the numbers keep rising.

Up against that kind of pulling power it’s challenging for places off the beaten track to get a look in, but one site is making a name for itself – and was around long before the Incas. With the help of high-profile Peruvian chefs, the salt ponds of Maras, 40km north of the southeastern city of Cusco, are hot property. 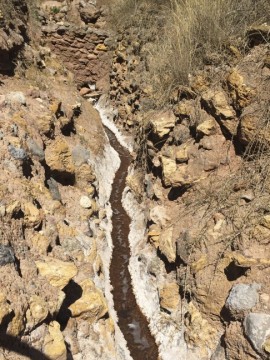 Rounding the corner on the long and winding road through the high Andes to the Inca site of Moray, the bleached white strip of salt ponds comes as a surprise. The steep valley slopes are rusty brown and covered with coarse scrub, making the ponds all the more striking.

Salt ponds are more commonly found on coastal plains, filled with seawater from the incoming tide. The ones in Peru are at an altitude of 3,000 metres. It’s a long way to the ocean, but it wasn’t always so; this impressive mountain range was once part the sea floor.

The movement of tectonic plates pushed the seabed up to form the Andes. The sea salt was locked into the rocks and filters out through the Qoripujio spring.

The Incas (early 13th century to 1572) are credited with many of Peru’s striking constructions, but these ponds were created during the Chanapata Culture (AD200 to AD900).

We pay the 10 soles (HK$24) admission fee and take the steep steps down to the ponds. The Qoripujio spring is only about 20 centimetres wide and would be easy to miss if its sides weren’t encrusted with a thick layer of salt. Dip your hand into the stream and you’ll find the water is warm; lick your finger and you’ll be left in no doubt as to where the salt comes from.

This small stream feeds all of the roughly 5,000 ponds – each of which is about four metres square – staggered down the valley in terraces.

An intricate network of channels feeds the spring water into the ponds. The keeper of each pond lets water into their pool by opening a notch in the side wall. Each pond is about 30cm deep and, when it is full, the water is left to evaporate in the dry Andean air. When the pool has crusted over, the keeper uses a wooden baton to scrape up the salt, which is put in a basket to drain.

Renowned Peruvian chef Gaston Acurio (see sidebar) put Maras on the map a few years ago, when he raved about the salt and began using it in his dishes. Rafael Piqueras, another Peruvian chef, loves the salt so much he called his Lima restaurant Maras. Salt grinders filled with the pink salt can now be found on the dining tables of some of the country’s top restaurants.

The mineral-rich salt doesn’t just add flavour to dishes, it’s also good for you, claims our guide. It contains magnesium, iron, calcium and zinc, which help reduce stress and prevent anaemia and osteoporosis.

It provides a buffer for blood sugar levels, preventing diabetes and enabling diabetics to use less insulin. What’s more, the producers of the gourmet salt say its source goes through an area lined with rose quartz, giving it additional healing benefits.

There is now a thriving collection of shops clustered just above the ponds, selling pink salt neatly packaged and labelled “gourmet” and “100% natural”. There are plenty of salted snacks on offer, too – including corn chips and fried banana slices – and entrepreneurial locals have created an extensive range of bath salts and exfoliating scrubs.

There are even big slabs of the salt for sale, to use on a barbecue, to flavour the food.

The admission fees go directly to the co-operative of families that works the salt mines and that money is having a positive impact; on a sunny Saturday afternoon in June, about 100 locals have gathered under big green tents to celebrate the purchase of two shiny red tractors. Many local farmers manage a small salt pond in addition to their land and the tractors will be made available to everyone in the community for the latter.

The Maras salt pond co-operative exports pink salt to Japan and Switzerland and, although it doesn’t yet have a distributor in Hong Kong, you can buy it at speciality stores in the city, and online.

Amazon sells an 8oz bag for US$5, almost 10 times more than the sellers in Maras charge.

Determined to make sure that Maras is on the tourist map, one shopkeeper offers to stamp visitors’ passports with a message that reads: “Peruvian Pink Salt”. It’s uncertain what immigration officials will make of the chop, but it shows the locals are keen to be noticed. 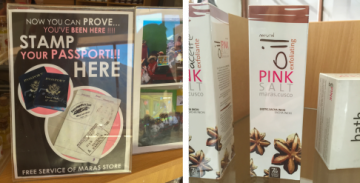 Getting there: KLM flies daily from Hong Kong to Amsterdam, and from the Dutch city to Lima. Tour company Viracocha Turismo Internacional (viracocha.pe, tel: 511 445 3986) organises visits to the Maras salt ponds.

Gaston Acurio has been Peru’s best-known chef for more than a decade and has been instrumental in putting the country on the gastronomic map. He has helped bring Maras pink salt, as well as plenty of Peruvian dishes, to international attention.

The 47-year-old oversees a culinary empire of more than 40 restaurants in 13 countries, the jewel in the crown being Astrid y Gaston, in the Peruvian capital, Lima, which he founded with his wife, Astrid. This year, the restaurant was 14th on the list of the World’s 50 Best Restaurants.

A 19th-century mansion houses three restaurants, a bar that serves original cocktails, an extensive kitchen, an experimental kitchen and a herb and vegetable garden.

Come hungry because the three-hour, 28-course tasting menu is an absolute must-try, especially the yema con pollo – basically a fry-up with eggs, sprouts and kale. The long sequence of dishes is complemented with music and art, and some of the plates are especially designed for the dish they carry, such as the one that bears the huevo chimbo (right), a traditional Peruvian egg-based dessert.

The current tasting menu sets out to tell stories about Peru and its landscape. 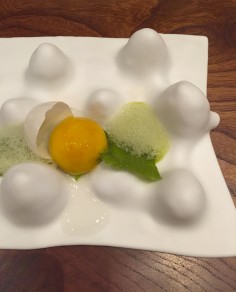