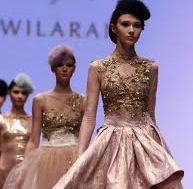 This city’s fashion week wrapped up with attendees lamenting the quality of the event, which is essentially a trade show with a smattering of runway shows for emerging brands.

“The fair was just so-so. I came two years ago and it was much better — there were buyers from the U.S., Europe and the Middle East. My bags appeal to European taste, but I don’t see any European buyers, they are mostly from Asia,” said Toshiyuki Kiuchi, chief executive officer at D-02 Office Inc., on the last day of the spring-summer edition of HKTDC Hong Kong Fashion Week, held at the city’s trade center.

Kiuchi also expressed concerns about the fallout following the crisis in Greece and China’s stock market crash. He said the current weak yen meant his sales were still strong, but he was worried about how the recent economic turbulence would impact the Japanese currency.

Others were less anxious about the economic turmoil. Hong Kong-based jewelry wholesaler Ann Lee from Annidea has been a regular at the fair for five years and said buyers plan their trips several months ahead and were already en route to the event when the stock market news hit.

“The [Greek] referendum is so recent we don’t see the impact here. Besides, I focus on Asia and Asia Pacific buyers so I’m OK, there are lots of those,” Lee said.

The spring event usually attracts a smaller international audience than the January fair as many overseas buyers take their big annual vacation in July. The fair attracted some 1,200 buyers from 18 countries, marginally down on last year and following the downward trend of the last few years.

Exhibitors noted not only a fall in the number of European buyers, but also that those who did attend were more cautious about spending. The president of Nantong Fashion Apparel Co Ltd., who goes by the single name of Snowdy, first took a booth three years ago and made some good contacts, particularly with Finnish buyers. She keeps returning to maintain those contacts but said she has made few new connections.

“The Finnish buyers came again this year for our T-shirts, but they don’t buy so much like they used to before. Everything is slower, less is happening,” Snowdy said.

Sung, who designs her own label with partner Kenneth Kung, is one of the rising stars of the Hong Kong fashion scene and said her most recent line is heavily influenced by her heritage.

“I expect we will see more of this trend in Asian styling — having a modern cut and adding Chinese elements,” Sung said.

“It is disappointing we didn’t find any European buyers here, but in September we will go to the fashion week in Rotterdam and we hope we can get some orders there,” said executive brand director Kung.

Also well attended was the Macau Fashion Parade and the Designer Collection Show featuring local designers Mirabilis, Douglas Yuan and Meredith Yeung, as well as designers from India and Australia.

But outside the catwalk events, buyers felt the fashion element of the fair was tame compared to previous years, when more adventurous styles, colors and designs were on show.

“This isn’t so much about fashion any more, five years ago was much better. There’s nothing here that is surprising me or exciting me,” said Istanbul-based Nail Goksoy from Park Moda, who came looking to buy jackets for the Turkish market.

“Before there were more decent products and new designs. Maybe people are afraid of copycats so they don’t want to show their best new products,” Cheng said.