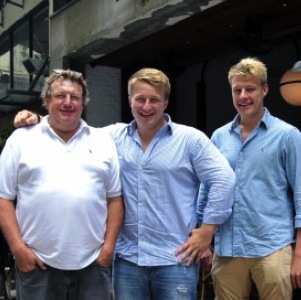 With 95 food outlets across Hong Kong and Vietnam, Parfitts’ empire is a real family affair. Starting with a pizzeria in Sai Kung, Hong Kong, the Parfitts have built a hospitality empire in the city and in Vietnam. Now Wayne Parfitt is helping the next generation learn the business

It’s a Sunday afternoon and restaurateur Wayne Parfitt is standing amid the rubble of a gutted shop space on Sai Ying Pun’s foodie street, High Street. The place is all slabs of concrete and exposed electrical cables and the burly Australian in the middle of the chaos looks like he’s in his element. Just metres away, the High Street Grill is buzzing with the brunch crowd. We’ve barely finished our eggs Benedict when he comes over.

“You’ve got to come and see it when we’re finished, it’s going to be something new,” says Parfitt, explaining the construction site next door.

In Wayne’s world you don’t need to wait long for things to happen. When we meet less than a week later that shell of a shop has been transformed into Ollies. It’s a new outlet for his Castelo Concepts group that includes Jaspas, Oolaa and Wagyu – restaurants that feature an affordable international menu and a laid-back vibe. 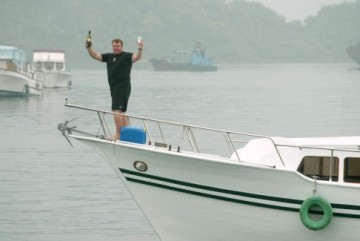 Wayne is juggling another three new projects – two in Kennedy Town and one in Discovery Bay. The past five years have seen a feverish growth in the business.

“Between Hong Kong and Vietnam we’ve got 92 or 95 outlets. We’ll probably get to the end of this year and then pull back a bit and go back to square one and start renovating some of our older ones and bringing them in line with this,” he says, casting an eye about the industrial-chic cool of High Street Grill.

When Parfitt says he wants to slow down, you wouldn’t want to bet on it. But one thing he seems pretty sure about is making way for his sons to get more involved in the business. He and his wife Andrea have three children – daughter Jessie, 26, was born in Australia and Jack, 23, and Michael, 21, were born in Hong Kong.

Andrea herself was a Hong Kong kid – she attended the German Swiss International School before being sent to boarding school in Australia, which is where she met Parfitt. The couple didn’t start dating until Andrea was at university and Wayne was playing professional rugby in Brisbane. The rugby gene has been passed to Michael, who is studying at university in Canada, and Jack, who signed a two-year contract with the Hong Kong Rugby Football Union in July.

Actually, the younger Parfitts have been involved in the business for more than a decade – they grew up with it. Jessie was a toddler when the couple came to Hong Kong to see Andrea’s parents, and they never left. Andrea’s parents lent them HK$100,000, which they used to open a 600 sq ft pizza place in 1992 that launched them in the restaurant business. That original, Pepperonis, still stands in the same spot in Sai Kung.

Jack recalls working in the Pepperonis kitchen as a 12-year-old: “Dad wouldn’t let us sit around. We worked and earned a bit of money. We used to work for two- to three-hour stretches doing the dishwashing, which we used to hate, or making pizzas – that was the number one thing.”

Michael cut his teeth on the Jaspas junk, the 65-foot vessel Parfitt bought for the family when his children were learning to swim. Friends enjoyed the boat-barbecue trips so much he turned it into a side business and today has six Jaspas Party Junks.

“When I was 12, I started working on the Jaspas junks, doing basic things like serving food and drinks. It was for pocket money. Dad’s a firm believer in not dishing out money – you’ve got to work for what you want. It was a big life lesson,” says Michael.

Andrea adds: “Wayne has always been quite strict with the kids – they’ve got to get in and help, know what they have and where it comes from … he’s a firm believer that you learn by doing.”

The three children went to the Australian International School and then to boarding school in Australia.

Wayne’s face lights up as he recounts Michael’s response from one of his career days. “It was one of the funniest things ever … He said, ‘I just want to do what my old man does’. And what’s that? ‘He drinks a lot and sits on the back of his boat most days’,” says Parfitt Snr.

Wayne likes to make things sound easy, but it’s obvious that the success of Castelo Concepts didn’t happen by sitting on the back of a boat. He started out in the hospitality industry aged 17, working as a duty manager in a pub. His older brother Brian was already in the business.

“I liked the buzz of being in the bars, it wasn’t so much the food side. As soon as I left school that was all I wanted to do, I went and worked with my brother,” says Wayne.

Then, 17 years ago, when his business began to take off in Hong Kong, Brian came out to join Castelo Concepts. Soon after that his schoolfriend Craig “Jacko” Jackson came from Australia to work in the Hong Kong restaurants and then take a gamble and set up the group’s Vietnamese operation – a venture that has proved very successful. “Jacko is amazing. He’s got nearly 2,000 staff to run in Vietnam. I don’t think we’ve had a crossed word in 20 years,” says Wayne.

The restaurant empire is a family affair – Andrea left American Express when the children were young and took over running the Sai Kung-based office, which today has a staff of 22. And when Jack and Michael were 17, both did stints managing the restaurants, just as their Dad had done at that age. Jessie did her share of hands-on restaurant work, as did her fiancé. But they are set up in their own careers in Australia, where Jessie is the marketing manager for a swimwear company.

Jack and Michael, however, are both keen to get involved in the business. “Jack and I both agree we don’t want to jump on the bandwagon – we want to create our own name, we don’t want the easy way through. We’ve had such a kick-start and education from Dad, we want to have a crack at a bit more ownership and to learn for ourselves,” says Michael, who has a couple more years at university.

Playing professional rugby gives Jack time to be involved in the family business when he’s not training. He’s working on the new Kennedy Town venture, and has bought shares in it – “it depleted my bank account” – and is keen to contribute new ideas for the business.

“I try and stop Dad doing anything stupid. Like he wanted to have park benches in the new restaurants, but I told him ladies don’t like hoicking up their skirts. That one I got past him,” says Jack.

However, Wayne seems to value his children’s input more than he lets on. Perhaps it’s a case of tough love. “Socially they are out doing things I probably wouldn’t do – going to clubs and restaurants. It’s refreshing to have a younger set of eyes on everything from the music to the lights or even the salt and pepper shakers on the table,” Wayne says.

In 2006, he and Brian brought the American doughnut chain Krispy Kreme to Hong Kong in what was to prove a not-so-sweet and short-lived franchise, but it brought an important lesson.

“It taught me to stay away from partnerships unless they are family because they just don’t work. At least with family if there are things you don’t like you can meet at the table. Not franchising may restrict your growth, but you will be 100 times happier because you’ve got control and that’s the nicest thing to have,” Wayne says.

Looking ahead, Parfitt is putting the pieces in place to secure a steady supply of wagyu beef. He’s bought his own pure-bred wagyu cattle in Australia and his partners there are preparing to start a breeding programme.

“The consumption of beef globally has gone crazy. We thought, ‘Bugger this, we won’t get caught up in this so we’ll breed our own cattle’. The boys understand to be in this business in 10 years will be different and the cost of wagyu will go through the roof,” says Wayne.

Jack is already thinking of bringing some friends into the business: “I’ve got good mates in the farm industry. Maybe in the future they can help create products. Working with mates, it comes down to a trust thing: you help them out, they’ll help you out – Dad’s a big believer in that,” he says.

The Parfitt sons are also eyeing potential new markets, with Myanmar, Mongolia and China all possibilities.

“Dad is getting to the stage where he says he wants to quiet down a bit. But he says that and two weeks later he’s opening three restaurants.

“Jack and I would love to do something with Dad and at the same time to do more ourselves,” says Michael.