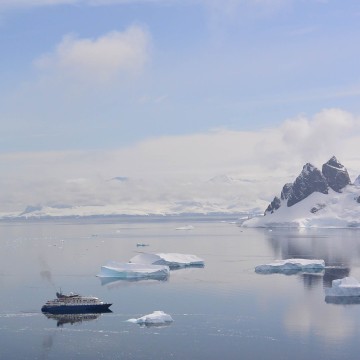 Antarctica is best approached by sea. Only a slow, and sometimes rough, rite of passage can prepare visitors for this immense, dramatic and ever-changing continent of ice and its extraordinary wildlife

No matter how much you prepare for Antarctica, it still comes as a surprise. The vast, white continent is so unlike anywhere else on Earth that it’s the closest most of us are likely to come to leaving the planet.

It’s possible to take a commercial flight directly to Antarctica – the plane lands on a glacier – but that would spoil the experience. This is a journey that demands to be savoured. Hotfooting it straight to Antarctica would be like fast-forwarding to the climax of a thriller: the tension and build-up are a large part of the pleasure.

Sea Explorer is a luxury expedition ship operated by Polar Latitudes. Like most cruise ships to Antarctica, it departs from Ushuaia, on the southern tip of Argentina, and makes its way through the picturesque and protected Beagle Channel before charting a course across the Drake Passage, a stretch of water that is notoriously unpredictable. If you’re lucky you could cruise through the two-day crossing – a “Drake Lake” experience. If not, it could be a “Drake Shake”, where the ship is tossed about by sometimes brutal weather. But whatever the Drake throws at you, it’s all part of the rite of passage to Antarctica.

A wandering albatross follows the ship in the afternoon. Another joins him and for hours the pair soar majestically, accompanying the ship south. In summer, the sun sets after 10pm, but it never gets properly dark. It’s close to midnight, the inky sea brushed with twilight when we spot the first iceberg from the bridge. It shows up as a yellow blob on the radar and it’s a good 10 minutes before we see it silhouetted against the sky. There’s a thrill as we pass it, like stalking a wild animal. This is why you want to cross the Drake Passage. You want these little teasers so you are better prepared to comprehend the vastness of Antarctica.

In the morning, the radar shows dozens of icebergs but you don’t need any technology to see them – they’re all around us. Up on the bridge the Filipino crew charts a course through the icebergs. No two icebergs are the same – some are awe-inspiring in size, others small and known as “growlers”. Some are flat-topped, or “tabular”, and are freshly carved from a glacier, and others have been bashed about and sculpted by the sea.

And just as we are becoming accustomed to seeing the icebergs in the grey and gloomy afternoon light, there is a break in the clouds and a shaft of sunlight slides across the sea and widens until it’s a great gash in the sky. We get out first sighting of land – a breathtaking spotlight on the white desert.

Think of Antarctica as a giant stage set: the director has only a few materials to play with – ice, water and light – and yet from this simple palate he creates such dramatic and ever-changing scenes. You could land at the same spot a dozen times and it would look different each time, such are the vagaries of the weather.

The landings are done by Zodiac, an inflatable rubber motorised craft that carries about 10 people. The International Association of Antarctica Tour Operators (IAATO) oversees tourism and regulates where and when ships visit. Hannah Lawson, the expedition leader, has reserved the landing sites well ahead of the voyage. Chief among IAATO rules is that only 100 passengers can go ashore at any one site. This means that if you are on a ship that has 200 passengers, landings have to be staggered. Sea Explorer is a relatively small ship that takes about 100 guests, which means everyone can go ashore each time.

Antarctica really is a land of ice – 98 per cent of the continent is frozen water and 88 per cent of the coastline is ice, either part of the ice sheet, ice shelves or glacier. This makes landing a little tricky and the expedition team must scout out a suitable ice-free landing site for each shore visit. They aren’t the only ones facing this dilemma – penguins do, too. At the start of the breeding season in November, the penguins come ashore to find a mate. No surprise then that the Zodiac and penguins often share the same landing sites. This doesn’t seem to bother the penguins; they’ve not learned to be fearful of humans and treat people as just another species.

Penguins are ridiculously endearing. Even the toughest cookie goes a little soft inside at the first close-up encounter. They move through the sea like dolphins and from the Zodiac you can marvel at the way one flick of their fins propels them through the crystal clear water. Another push and perhaps a little scramble and they shoot out of the water onto the land. And this is where they become so sweet and often amusing as they waddle through the snow.

What people don’t tell you about penguins is that they poop. A lot. What’s more, it’s pink poo. The pink colour comes from their diet of krill, a tiny, shrimp-like crustacean. The paths from the shoreline to their nesting site are known as “penguin highways” and from early on in the season they are clearly visible from some distance as distinct pink lines etched into the snow.

From late October through November, you will see the penguins coming to shore to find a mate. At the Antarctic Peninsula – where the majority of ships visit because there’s more to see in this area – the three types of penguin you’re most likely to see are the Gentoo, the Chinstrap, and the Adélie. Each has distinctive markings and it doesn’t take long to tell them apart. The courtship ritual is an extended one. Most keep their mate from one year to the next and as soon as they get onshore, they go about trying to find their partner by stretching their necks up to the sky and calling out in donkey-like braying noises.

An established nesting colony is a noisy – and often smelly – affair. Pick out one penguin from the group and watch for 10 minutes and you’ll appreciate how industrious they are, searching for pebbles and twigs to line their nests and bonding with their partner. Occasionally, there will be a noisy outburst when a jealous or thieving penguin oversteps the mark and is quickly put in its place. Penguins are very social creatures and observing them is like watching dozens of soap operas played out on the snow.

After the courtship period – and some fast and furious mating – comes nesting time. Visit at the end of December if you want to see the chicks hatching and the white and grey balls of fluff demanding to be fed. At this time, most of the snow has melted to reveal the craggy rock faces that the penguins nest on. Later in the season, the weather is also warmer, with more blue-sky days and a better chance of spotting whales.

Although penguins tend to steal the limelight, there is so much more to this place. We see a fin whale, minke whale and humpback whales, Weddell seals with their permanent grins, fur seals and a host of birdlife. Beyond the animal life is the sheer spectacle of the imposing icy panoramas. Without trees or anything else that might give you a sense of scale, distances are difficult to judge. Everything is bigger than you realise, lending the landscape a surreal, Alice in Wonderland edge.

Lawson cuts the Zodiac’s engine and we drift though an iceberg graveyard. The icebergs here have run aground and are slowly melting. These majestic slabs of ice, carved from a glacier and shaped and moulded by the sea, wouldn’t look out of place in a modern art museum.

Inherently unstable, the icebergs periodically lurch forward and flip over, revealing intricately chiselled or pocked undersides. Some are eroded to form archways and columns and others have long, protruding blue tongues of ice. Get up close and you can see the bulk of its body ballooning out underneath like a mammoth jellyfish.

And then there are the occasional pieces of black ice – 50,000-year-old water that has been compressed over time so that all the air and impurities have been removed, leaving ice that looks like shards of glass. Lawson leans over the side of the Zodiac and with bare hands, for a better grip, she heaves a huge chunk of black ice into the boat.

“We can take this bit back – it’s the best ice to have in your G&T,” Lawson says.

After sipping a gin and tonic from the ship’s deck, all other G&Ts will pale into insignificance. It’s the ultimate cocktail on the trip of a lifetime.