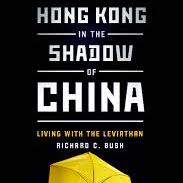 Hong Kong-born Richard Bush, a former US Congressional adviser and intelligence officer, sees potential for city but says political mess needs fixing for it to be unleashed, and expects another Occupy-style flare-up

American Richard Bush spent his formative teenage years in Hong Kong before moving to the United States, where he went on to have a long and successful career as an adviser on China.

He has served with the China Council of the Asia Society, was a staff consultant on the House of Representatives Foreign Affairs Committee’s Subcommittee on Asian and Pacific Affairs, and a national intelligence officer for East Asia. Since 2002, he has been the director of the Centre of East Asia Policy Studies at the Brookings Institution in Washington. But his interest in Chinese history and China wasn’t anything he picked up at international school in Sha Tin in the 1960s.

“I went to King George V School and I learned absolutely nothing about China there. But the experience of living in this very interesting society had a very powerful hold on me,” he says.

Indeed, when Bush left Hong Kong aged 17, he was determined to study European history – no doubt influenced by colonial Hong Kong – and it was only in his second year at college that he realised it was China that most interested him.

It has been 52 years since he left Hong Kong to attend college in the US, and the Hong Kong that he left, he says, is the city that China thought it was going to get. Much changed in the intervening years – Hong Kong has grown up fast and has a political savvy that would have been impossible to imagine in the 1960s and ’70s.

Bush’s postings and research work have taken him in and out of the city many times over the years, and last month he was back to address the Asia Society at its Admiralty centre. He was there to speak about his new book, Hong Kong in the Shadow of China, which he began writing in 2013 and which takes in the Occupy movement and the bookseller abduction fiasco at the beginning of this year. He begins by acknowledging a somewhat awkward point – he’s an outsider in town telling us Hongkongers what we’ve just lived through.

“I suspect there is little I will say you don’t in some way already know,” he says, addressing a full house in the centre’s most impressive function room, the numbers seemingly padded out with more students than usual.

His 20-minute talk is a rational, academic (“on the one hand, on the other hand”) summary of the past few years. He refers to the Occupy movement as a “double tragedy” – and one that’s likely to be repeated. “First is the missed opportunity to democratise Hong Kong’s political system, but secondly it has made it much harder to address policy issues concerning the city’s competitiveness and governance,” he says.

Bush expresses hope that when the Chinese Communist Party holds its 19th party congress next year it will approve new proposals to reform the process for selecting both the Hong Kong chief executive and Legislative Council. While he admits it might be excessively optimistic, Bush says he believes that a more democratic Hong Kong would be a more stable Hong Kong.

“I believe those citizens who are feeling alienated from the current system might recalculate what is possible by working through reform institutions and decide to give them a try … It would be a shame if some people in Hong Kong decided to imitate those in the colonial period who felt that only rioting would command proper governmental attention to these problems.”

But popular elections for the chief executive and all of Legco are not the ultimate solution, he says. Even if that battle were to be won, there would still be plenty more institutional fixes needed.

It is when Bush takes audience questions at the event that things start to get interesting. To begin with, no one raises their hand to ask a question. The society’s chairman, Ronnie Chan Chichung, orders that the lights be turned up, presumably to try to flush a question out of the audience. It’s a female student at the back of the room who gets the ball rolling.

“On a scale of one to 10, how freely do you think you can talk about the issue of independence right here, right now?” she asks.

Bush acknowledges that electoral candidates who advocate independence aren’t able to run for office and that the subject can’t even be discussed in secondary schools, and calls for more discussion of the subject, just not in schools. And he even offers a rating.

“I would give it a seven, but think that maybe it would be better if it was a nine,” he says, adding that independence is “not a realistic option”.

When the questions get going, they come thick and fast, and are mostly requests for him to peer into his crystal ball and predict Hong Kong’s future. There are plenty of nodding heads in the audience when a suited gentleman asks about an “Occupy Mark Two”.

“How will the next flare-up play out? I say ‘will’ because every thinking person in Hong Kong is aware of the fact,” he says.

Bush tiptoes around the police handing of the 2014 protests – “I hope the Hong Kong authorities would act in the way they ended up acting” – before giving voice to what many in the audience, and Hong Kong, are worried about.

“I would really worry about Beijing saying, ‘To hell with it. We’ve provided too many freedoms that have been exploited by people who don’t respect our interests and we need to take some away’ – that’s a really bad outcome for all concerned,” he says.

Back in the leafy surrounds of the Asia Society the following morning, Bush is adamant that Hong Kong can expect another “flare-up”.

“I can’t say how or why it would occur, but it doesn’t take too much creativity to come up with a scenario because I think the forces of alienation, events and frustration are still there beneath the surface,” he says, adding that he hopes the police will be better prepared.

But it’s not all doom and gloom. He believes that Hong Kong should be on the lookout for the next big growth industries and his firm favourites are technology, health care and innovation. Government support and new policies would be needed for Hong Kong to succeed in these sectors, he adds.

Take the health care system that he believes would benefit from adapting to market demands and being more flexible by, for example, easing the restrictions on overseas-trained doctors practising in the city. The same goes for the technology sector, where start-ups struggle to find affordable rental space and set up bank accounts.

“This is not the only place in the world where government regulation is sapping initiative,” he concedes.

Bush is now in his 60s, but if he were in his 20s and an entrepreneur or businessman, rather than an academic and adviser, would he come to Hong Kong to make his fortune? His answer, like all his replies, is frank and well considered, and for Hong Kong a reminder that the city is in danger of losing its shine.

How can we get the sparkle back in Hong Kong and return the city to its entrepreneurial heyday? We’re back to thorny politics.

“I think the place is stuck over political issues, and it may be essential to get things unstuck before the potential and dynamism that certainly exists can be released. All the more reason to take the risks that had to be made to put the political system on a different basis. Then and only then will the policy issues surrounding initiative and entrepreneurship and growth be able to be addressed.”