Home / All aboard, gourmands 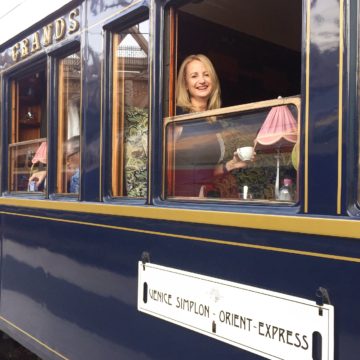 Transporting travellers from London to Venice in style, the Venice Simplon-Orient-Express is making this fabled journey taste even better than ever.

It has just gone 7am and platform C at Paris Gare de l’Est is a urry of activity. Six chefs in spotless white coats and starched tall hats are busy loading crates of fresh produce onto the Venice Simplon-Orient-Express.

There is a wooden box of melons, dozens of punnets of strawberries and several big rounds of cheese. Then come several boxes of Brittany Blue Lobsters, so fresh they are still kicking. All are passed through the kitchen carriage window to head sous chef Igor Maccagnan.

“You like lobsters? You will see them again soon for your brunch!” says the chef jovially.

We do indeed see the lobsters several hours later – a generous half lobster per person, served with mushrooms and shallots and a cress butter sauce alongside whirls of potatoes and chive.

The Belmond group operates the lion’s share of the world’s luxury train journeys and the classic overnight route on the Venice Simplon-Orient-Express, from Venice to London, is one of the most popular.

While the scenery is the same whichever direction you travel, the advantage of the trip departing from Venice is that the timing of the trains at Calais means that you get this additional meal. While the train’s menu changes seasonally, the lobster and champagne brunch has been a xture for 35 years.

Fine dining is a huge part of the Orient Express experience – after all, there is little else to do but eat, drink and watch the world go by. As the train pulls out of Venice station and we settle into our cabin, we are o ered a glass of bubbly. Let the decadence begin.

TAKING THE LONG WAY ROUND

If you wanted to get to London quickly, you would naturally go by air. The Venice Simplon-Orient- Express is all about savouring the journey, returning to a time when travel was something to take time over and enjoy. If you succumb to the experience and let the train work its magic, this is as close to time travel as you are likely to ever get.

The vintage carriages are a huge part of the nostalgia. The Orient Express had its heyday in the 1920s and 1930s and ran several routes, including the Simplon-Orient-Express, which ran Calais-Paris- Lausanne-Milan-Venice-Belgrade-Istanbul and was driven to infamy in Agatha Christie’s Murder on the Orient Express.

This golden age of travel came to an end in May 1977 – cheaper and faster air travel was the nal nail in the co n, and the carriages were sold o at auction. James B Sherwood, an American entrepreneur with a love of train travel, bought a couple of them. Over the next few years he spent a fortune buying and restoring a total of 35 vintage carriages, and in 1982 the revived Venice Simplon- Orient-Express made its maiden journey from London to Venice.

Each delightful art deco carriage has its own story. Sleeping car 3544 at the front of our train has a very colourful history; it went from carrying the rich and famous to being used as a wartime brothel. The beautiful restoration work and detailing – brass candle holders, Lalique glass panels, historic timber used for the wooden panelling and ne art deco marquetry – all play a huge part in transporting you back to the 1920s.

But it’s the culinary experience that really makes you feel as though you are travelling on a train 100 years ago. This is old school ne dining. Crystal glasses, starched white napkins and everyone dressed for the occasion, men in their penguin suits and women in long evening dresses.

The menu, designed by executive head chef Christian Bodiguel along with sous chef Maccagnan, re ects the tastes and produce of the countries the train passes through.

“We cross from Italy to Austria to Switzerland and then France, so we take a little from all the di erent cultures and create the menu,” says Maccagnan.

On this journey there is risotto, tomatoes and mozzarella from Italy, speck from Tirol in Austria, cheese from Switzerland and foie gras and Brittany Blue Lobsters from France – and most of the produce is picked up fresh on the journey, indicative of the planning and organisation needed to pull o gourmet meals on a moving train.

Consider rst that the train’s twin kitchen carriages are much smaller and narrower than most restaurant kitchens. Not only is there little room to move around – just enough space for three chefs in each – but there is also limited space for storage. This means the chefs must bring exactly what they need to prepare meals for the 100 passengers.

“It is very di erent from a hotel. If we forget something when we leave Venice then there is nothing to do. We can’t say to the guest, ‘I can’t give you dessert because I’ve forgotten it’. And some of the menu is very complicated and needs a lot of ingredients,” says Maccagnan, who has worked on the train for 10 years.

Don’t think for a moment that elements of the meals are prepared in advance. This is the Venice Simplon-Orient-Express and everything is made fresh and from scratch, which means a lot of cutting and chopping. Surely that’s challenging on a moving train? Maccagnan explains that chefs new to train kitchens are actually more likely to cut themselves when the train is at a station than when it’s moving.

“The cook is concentrating so much when the train is moving, but when it stops he’s not concentrating and that’s when he cuts himself. It took me six months to get used to it,” he recalls.

But one thing that continues to excite Maccagnan about working on the luxury train is the ever-changing view from his kitchen. Passing the Austrian Alps or seeing the snow-capped peaks of tiny Liechtenstein never gets boring, nor does coming up with menus

for passengers with special dietary requirements. He seems genuinely excited when he explains the dinner he has planned for a guest who is vegan and gluten

That is enough to make you want to claim to be vegan and dairy free, too, until you see what’s on the menu for everyone else. The recipes are classically European, but with a modern presentation: sword sh, shredded fennel with taggiasca olives and green beans; veal loin and braised knuckle carpaccio with rosemary Colombo sauce, oat risotto in a red onion nest; fan

of mange tout and baby leeks bouquet, a selection of cheeses with almond mousse and blackberries on a praline biscuit. And, if you have any room left, there are mignardises.

It is safe to say that you get very well fed. And, after dinner, there is nothing to do but retire to the bar car. Built in France in 1931, this long carriage has recently been beautifully restored in art nouveau style by interior designer Gerard Gallet.

“We don’t have space for everyone to sit down, but everyone can have a drink. The bar is where the guests get together, it gets very busy, the ambiance is very good,” says bar manager Walker Nisi.

It may be a busy bar, but there is room enough for a grand piano and a pianist who tinkles away on the keys all evening. And the guests do indeed start mixing and chatting – it’s hard not to when you are knocking knees and knocking back classic cocktails at the same time.

Testament to Nisi’s genius as a bar manager is that he keeps everyone around the bar smiling, despite the sometimes cramped quarters. This is a barman with balance; a man who can create a Pousse Café du Train, a classic after-dinner cocktail featuring three layers of liquor, without spilling a drop or even muddying the layers.

Nisi has also created a cocktail specially for the Venice Simplon-Orient-Express called the Guilty 12. The number is in part a nod to the 12 suspects

in Agatha Christie’s murder mystery, and is also a reference to the 12 countries that the train passes through every season. So, naturally, the Guilty 12 also has 12 ingredients.

The other ingredients are a secret, but it can be a fun after-dinner game to order a Guilty 12 and try and guess what they are. Another popular favourite is the Bellini – the classic Italian tipple made with Prosecco and peach puree.

“There is the modern fashion for mixology, but on board the train we keep the style of 100 years ago, the classic cocktail style,” Nisi says.

The bar stays open until the last guest leaves. And, when they retire to their cabin, they nd that it has been transformed into a snug bedroom with a thick blanket at the end of the bed and sweets on the pillow. Breakfast is on demand in the morning – co ee and pastries served in your cabin, just enough to keep

you sated until the champagne brunch. And after the crossing from Calais to Folkestone, passengers board the British Pullman for the last leg of the journey to London.

Now on English soil, the last of the journey’s six meals is a very British a air – a classic afternoon tea with a selection of savouries, sandwiches, cakes, scones with cream and, of course, lashings of Earl Grey. And, since it is the Venice Simplon- Orient-Express, there is champagne. It’s needed to soften the blow of having to disembark from the world’s most decadent time travel machine.