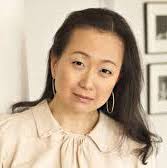 Korean American recalls growing up speechless and confused in New York, and says how hurt she’s been that Koreans haven’t embraced her work, and why we shouldn’t be so fascinated with young people, who ‘just have smoother skin’

Min Jin Lee is having a good day in Hong Kong. It’s the Korean American writer’s birthday and she has just stepped off a flight from New York. She has the happy glow of someone who has been nominated for a top literary prize.

“The flight was 17 hours and I’ll be here less than 70 hours – half of them awake. I’m not even sure I’m awake now. I’m here to see my friends, attend the festival and eat egg tarts – they have the best egg tarts in Hong Kong,” Lee says on Saturday during a Hong Kong International Literary Festival event.

On Wednesday she will be back in New York to attend the very fancy National Book Awards’ black tie dinner – she is a fiction finalist this year for her historic novel Pachinko , which tells the story of four generations of an ethnic Korean family, first in Japanese-occupied Korea in the early 20th century and then in Japan from just before the second world war to the late 1980s.

“I’ve got a 20 per cent chance of winning – there are five finalists,” she says.

Published in February this year, Pachinko has received widespread acclaim. Within months of its release, an annual poll in New Zealand voted it one of the best 100 books of all time. She even had fan mail from Caroline Kennedy and Scottish First Minister Nicola Sturgeon. But strangely, support from Korean readers has been lacklustre.

“A part of me felt hurt for a very long time that Koreans didn’t embrace this book as much as, let’s say, New Zealand. A part of me feels really sad because I spent my life writing about ethnic Koreans around the world and I really do love Korean people,” she says.

That may change on Wednesday if she wins the National Book Award. Should she pick up the top US literary prize, Koreans may be more eager to embrace her and the book.

“We all want to be affiliated with success. It’s the impulse of people who have been excluded, and Koreans have been excluded from lots of parties. I understand. That said, I do feel hurt. I am vulnerable to my ethnic group and I’m not going to say I don’t care, because I do,” says Lee.

Perhaps because it’s her birthday – “I’m 49, feel free to say I don’t look it” – Lee begins her Saturday appearance at the festival in a reflective mood. She admits to finding life confusing – “it’s so difficult being an adult” – and says the books she turns to are the ones in which authors convey an enormous amount of wisdom about life.

Wisdom, she says, is different from education or knowledge and she aims to be the kind of author who collects wisdom and shares it with her characters. As such, she sees herself as a traditional writer and creates long, structured narratives reminiscent of 19th-century British novels.

“I believe there is meaning in life. I believe there is good and evil. If I say those things it means I have to take everything I see and put it in this huge canvas. I’m creating a drama in which I’m trying to get you to feel catharsis and I can’t do that without creating a structure of a beginning, middle and end,” says Lee.

If that’s all starting to sound a little heavy, it’s not meant to. She wants readers to enjoy themselves, and the commercial success of Pachinko attests to that – last month it was in the top 25 on the Publishers Weekly list of the best books of 2017.

Lee herself is light and bubbly. Still on the subject of wisdom and age, she says she thinks the worldwide fascination with youth is “bananas”.

“It makes no sense – they don’t know anything. They just have smoother skin,” she jokes.

Lee’s own childhood was challenging. She was born in Seoul and immigrated to the United States with her family when she was seven. They lived in Queens, New York, where her parents ran a wholesale jewellery store. Thanks to the support of some kindly librarians, she taught herself to read and stories became her escape from the world.

“I couldn’t understand my peers – some were so evil, throwing things at me. I was really tall and didn’t have proper clothing because we were always running hand-me-downs from my cousins. I was a completely confused, speechless child,” she says.

Pachinko is the second in a diaspora trilogy – following Free Food For Millionaires (2007), about Koreans in New York. The third book will be a novel will be about the role of education for Koreans around the world, “because education is primarily the thing that connects Koreans,” she says.

Lee is on fire and she tells the audience – a full house upstairs at the Fringe Club, all the seats filled and eager festival-goers standing along the far wall – that she has something “completely insane” to share. This comes in response to a question from the audience about her use of Korean words in Pachinko.

“As a woman of colour, as a person who is a minority, I believe its important that other people know about my language and I don’t necessarily have to explain. In the same way, when I read 19th-century literature and if I have to understand a Latin phrase or a French phrase, it is incumbent upon me to learn it.

“I think we are global citizens, we are people of conscience and we have to learn more about each other. I can assert my space in the world as equally as other Western writers,” says Lee.

She makes the statement sincerely, boldly, and the audience erupts in applause. She looks surprised, smiles and says: “I didn’t expect that, but thanks.”

There is a lot of support in the room for Lee, not just from her friends and dedicated fans, but from those who have just met this sincere writer – they sense both her vulnerability and her power. Judging by the length of the book-signing queue, her appearance at the festival has added to her legions of international fans who will be rooting for her to win the National Book Award on Wednesday.