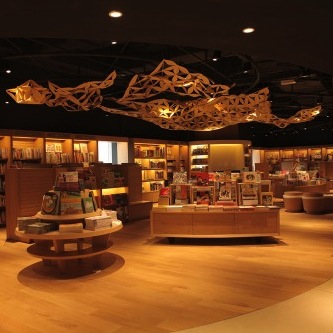 Taiwanese bookstore Eslite is expanding at a time when bookstores around the world are folding.

The key to its success, says Operating Director Catherine Wang, is a flexible business model that adapts to each locale.

“We are a chain bookstore, but we customize for each location,” she says. Customizing is about more than deciding which titles to stock, it’s about diversifying. Founded in 1989 by businessman Robert Wu, the first store offered humanities, arts, creativity and lifestyle books in a reader-friendly environment. That initial store set the tone for the brand, which is associated with culture and creativity, and Eslite went on to expand to include art galleries, restaurants, lifestyle products, shopping malls — and soon a hotel.

You heard that right: when the next store opens in Taipei in September at the Songshan Cultural Creative Park, it will include a hotel.

“We’re very excited, it will be the first hotel for the brand. No one else is doing this, using culture to package a hotel,” says Wang.

The hotel will have its own library and will offer music and movie packages for guests to make the most of the entertainment on offer at the cultural complex. 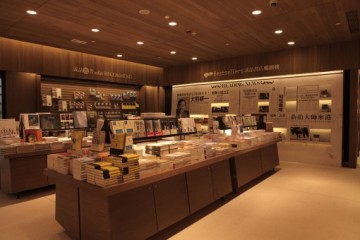 Eslite’s first mainland store is expected to open in late 2014 in Suzhou, an hour from Shanghai. In Suzhou the brand will diversify even further. Sitting on top of the mall that will house the bookstore will be twin towers — one block a serviced apartment and the other a residence.

Two more mainland stores will follow, both in Shanghai. Eslite has located sites for the new stores but has yet to finalize the terms of the contracts.

In Hong Kong, the city’s notorious high rents and lack of space is making it a little trickier to find suitable locations for more stores, but Wang says there are plans for up to four more in the pipeline.

The move into Hong Kong from Taiwan was relatively easy because the markets are similar in some fundamental ways — they both use traditional Chinese text, for one. But there were still some differences in reading habits to overcome. The 40,000-square-foot store in the heart of Hong Kong’s Causeway Bay shopping area was initially open 24 hours a day on Thursdays, Fridays and Saturdays, but the round-the-clock model — which had proved hugely successful in Taipei — didn’t work in Hong Kong.

“People in Hong Kong work long hours in the office and after midnight, when the MTR closes, they disappear,” says Wang.

And given the work-orientated lives of many Hong Kongers, it’s perhaps no surprise that the most popular books are ones on business, psychology (“How to deal with your boss”), health and cooking.

Wang expects literature and philosophy books to sell better on the mainland than in Hong Kong because the mainland has more of what she jokingly calls “cultural teenagers,” those eager to impress others with their high-brow reading habits.

Wang says the brand will look at each new store in turn to decide the relative split between books and lifestyle goods. The flagship stores in Xinyi sells 30% books and 70% other retail goods. In Hong Kong, the split is 75% books, 25% retail.

“We sell more books in Hong Kong because there are plenty of shops selling other goods here,” she says.

A flexible business model, one that assesses the needs of individual stores and comes up with creative ways of grouping books so that readers are introduced to a wide variety of titles, depends on flexible staff, says Wang.

“We can adapt to every market because of the passion of our staff. Salaries aren’t high in the publishing industry — its not like banking. Young people want to go into this area because we all love to read and reading has changed our lives, we have a passion for it. The quality of our staff is why we’re still alive.”