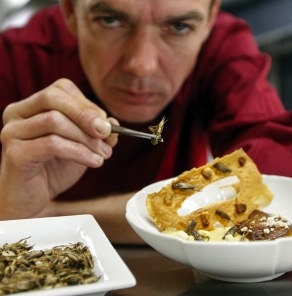 Eating creepy crawlies could help the environment, your health and your waistline

Fancy chewing on a caterpillar or making a meal of crunchy crickets? The idea might disgust you now, but the United Nations is hoping to change the public perception of eating bugs.

Switching to an insect-rich diet could not only be good for your health, but have environmental and economic benefits, too.

The UN’s 187-page report, Edible Insects, makes a convincing case: insects grow fast, thrive on the waste of many industrial processes, use substantially less land and water than other livestock, produce less pollution than cattle or pigs and they are good for you. Packed with protein, fibre, good fats and minerals, the report hails insects as a healthy and nutritious alternative to mainstream staples, such as beef, pork and chicken.

The purpose of the study was to answer the question: how best to feed the nine billion people who will be on the planet by 2050? 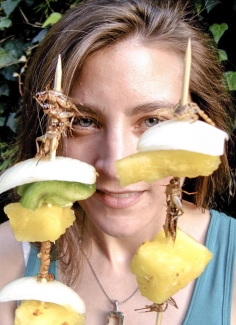 According to the report, two billion people are already eating insects – bugs are an integral part of the diet in many parts of Africa, Asia, Australia, South America and Mexico.

There are more than 1,900 insect species around the world which have been documented as edible, hundreds of which are being eaten. The report found the insects most commonly consumed by humans were beetles (31 per cent), caterpillars (18 per cent) and bees, wasps and ants (14 per cent), followed by grasshoppers, locusts and crickets (13 per cent).

But for those with Western tastes, the “yuck” factor that comes with eating insects is still a big obstacle.

Anyone who recoils in horror at the thought of feasting on creepy crawlies might do well to consider that they probably already have. If you’ve enjoyed the coloured chocolate Smarties, you’ve already crossed the line. Up until a few years ago, coatings included cochineal, a crimson food dye derived from an insect that feeds on cacti.

The US Food and Drug Administration says wheat flour with an average of 150 or fewer insect fragments per 100 grams, and tomato juice with no more than one maggot per 100 grams, is fit for human consumption.

Insects are found on the menus of some of the world’s leading kitchens. Celebrity chef Heston Blumenthal is known to cook with insects and French chef David Faure has been serving crickets with foie gras at his Michelin-star restaurant in Nice for the past few months.

Daniella Martin has been munching on bugs for years. She hosts the insect cooking/travel show and website Girl Meets Bug and is passionate about promoting this cheap, eco-friendly source of protein. She says mopane caterpillars, grasshoppers and beetle larvae are among the most nutritious. 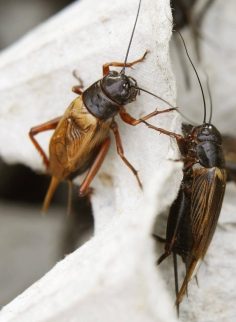 Mopane caterpillars are very high in protein and calcium and are an important food source for many in rural southern Africa.

“All insects taste a little different, but generally crickets and grasshoppers taste like nutty shrimp,” says Martin who prefers to eat them sautéed with garlic or roasted in the oven until they are crunchy.

If you need iron, crickets could be the answer. A 100 gram serving of cricket will give you 63 per cent of your recommended daily allowance.

Beetle larvae – also known as mealworms – are at the second of four stages of their lives and eat and grow until they have enough energy stored to metamorphose into pupae and then beetles. They are high in protein and fat.

“I like wax moth larvae best – they are easy to obtain from farms, easy to prepare, and have a very mild, pleasing flavour. They are fed a diet of bran and honey, which probably contributes to their taste,” says Martin.

Sautéed they taste a lot like mushrooms, she says. And oven-roasted they are more like pine nuts. “Both ways, they are delicious. I have heard first-time tasters say they taste better than chicken,” she says.

Ants can also be packed with goodness. Weaver ants have a protein content of 40 per cent to 50 per cent. They are popular in Central Africa, Myanmar, Borneo, the Philippines, Papua New Guinea and Australia. In Thailand, where they are twice as expensive per gram as beef or pork, they are fried or eaten in salads and soups. Termites are also very high in iron, protein and essential fatty acids.

Spiders aren’t insects, but they are often included in discussions of entomophagy, the practice of eating insects. Large spiders are a great source of protein. Every 100 gram serving of spider has 63 grams of protein, which is 126 per cent of RDA. It’s important to remove the fangs before you eat them.

Which parts of the insect you eat depends on personal taste. “Some bugs have hefty exoskeletons that you wouldn’t want to eat – giant waterbugs, for instance, have shells like hard plastic, as do certain scorpions,” says Martin.

To get the maximum nutrition, she recommends eating the whole body. The same is true of fish – by eating the entire animal, you take in more minerals and vitamins than when you just eat the fillets.

“I tend to eat the whole insect, even grasshoppers and crickets, but then, I’m the type to eat shrimp tails and leave the peel on my vegetables. I don’t mind the texture, and view it as extra minerals. However, many people prefer to remove the legs and wings from crickets, cicadas and grasshoppers,” says Martin.

But it’s not a good idea to go foraging for bugs as you don’t know what kind of chemicals or pesticides they may have come in contact with. The best bet is to buy them from a reliable source or raise them yourself.

But if you do find yourself stranded in the wild or cast in a Survivor television show, a good rule of thumb is to avoid eating the brightly coloured bugs, as well as the hairy ones, as they’re likely to be poisonous.