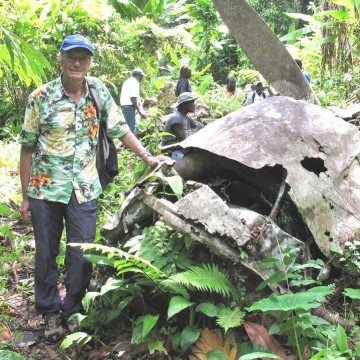 When it comes to deciding where to go there’s just one qualifier — it’s got to be edgy. The sort of place that isn’t just a challenge to get into, its even risky to be in. Political instability, corrupt police and active volcanoes all add to the thrill.

Wheeler isn’t a budget traveler these days — not after the BBC paid £130 million ($206 million) for the company — but he holds on to the shoestring philosophy of traveling low to the ground and meeting and talking to people.

Usually accompanied by his wife Maureen, his partner and travel companion since the 1970s, Wheeler shows no sign of slowing down. He recently trekked through the jungles of Papua New Guinea and climbed an active volcano in the Congo.

This fascination with “edgy” countries is nothing new. When he first heard George Bush speak of the “axis of evil” his immediate thought was, “I’ve got to go there!”

He went to Iran, Iraq and North Korea and rounded those off with another six countries that are often considered “bad:” Afghanistan, Albania, Myanmar, Cuba, Libya and Saudi Arabia. The result of those travels was “Bad Lands,” published in 2010.

“There were so many bad countries to choose from it was difficult to cut the list down to nine,” says Wheeler, and so his travels to edgy places continue.

One of the big attractions of these destinations is that they’re off the main tourist trail. Of course, it’s possible to get off the tourist drag without the sort of risk you face with edgy counties.

Tourism to Japan focuses on Kyoto, Honshu and Hokkaido, but few visitors go to Shikoku, the smallest of Japan’s four main islands, according to Wheeler.

“I spent several weeks in Shikoku and had a really interesting time, never saw another foreign tourist and I can understand why, you have to be a real Japanophile,” he says.

Weird and the wonderful

Shikoku is off the beaten track, but it isn’t edgy. The same might be said of Lonely Planet’s annual line-up of “hot” places to visit. They all have much to interest the traveler.

Take Montenegro, ranked second hottest country to visit in the 2013 guide. It’s only a little further down the coast from Croatia’s Dubrovnik, which has been a hot destination for years. Wheeler visited last year and has nothing but praise for Montenegro’s beautiful towns.

But it’s not on his edgy list. For Wheeler it’s the call of “the really weird and wonderful places” that excites him. Places like Pakistan. Not an obvious place to visit, especially in September when a new round of trouble was just kicking off.

“We were there right in the middle of the blasphemous (anti-Islamic) movie business,” he says. “The worst day, when they decided to have a love the prophet day and give everyone the day off to protest outside the American embassy, was just ridiculous.”

“All this was going on and then you go into the hotel and everyone is crowded around the television watching the riots and death to America banners. And then they turn around and see us and say, ‘Oh welcome. Please come and have some tea.’”

A recent trip to the Congo was made all the more interesting when several locals “arrested” him for taking photographs. Before matters could get out of hand he suggested they go to the police station sort it out.

“We adjourned to the head cops office, watched the Congo-Cameroon football game a while, phone calls were made and eventually I drive away with the Chef de Division who drops me back at my hotel. An hour and a half wasted, but an interesting hour and a half and zero cost,” he says.

It’s a typical Wheeler story — not just enjoying the journey, but loving the bumps in the road even more.

Also coming up on his edgy travel agenda is Somaliland. Not the easiest place to visit, given its an unrecognized self-declared defacto sovereign state and has only has three visa offices in the world — in Islamabad, Washington D.C. and London.

All this edgy travel does beg the question — is it safe?

“I try not to worry too much. Take Pakistan — you read the press and it seems like a disaster and then you get there and things aren’t so bad,” he says. “Touch wood.” 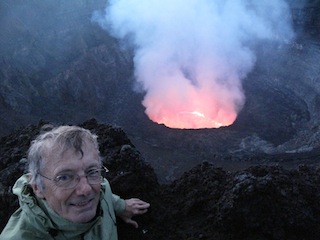 “It’s intriguing because it’s basically a country which has gone backwards for 50 years.

“When the Belgians made it independent it had great infrastructure, was one of the richest of the former colonies in Africa and its gone steadily downhill. You can go to a village where adults can remember cars and their children have never seen one.

“The roads have gone back to the jungle and there are no cars coming through. People queue for ages to see the gorillas in Rwanda, paying US$500 for a morning with them, and you can go and see the same gorillas in the Congo. The only tourists I saw were at Goma, on the border with Rwanda.

“They’d come to see the nearby Nyiragongo Volcano that is extraordinarily active. We were up there on the crater rim looking down on it hissing and spitting — it was the real McCoy.”

“People have been scared off for 20-odd years by FARC and the drug wars.

“I went two years ago. It’s got some of the best colonial architecture in South America — really beautiful old towns. I want to go back to do a walk to a place called Ciudad Perdida — which means lost city in Spanish — it’s a little bit like the Machu Picchu of Colombia.

“The only way you can get there is by walking — or helicopter — so you need to set aside about a week to do it.”

“New Guinea has amazing tourist attractions with very few tourists and with good reason — you don’t feel safe there, particularly in the capital.

“You’ve got to take care all the time and that obviously puts tourists off. I was there in February and tracked down the wreckage of Admiral Yamamoto’s Betty bomber in the jungle.

“It wasn’t easy. Although the wreckage had been in the jungle for nearly 70 years the local landowners decided to get into a dispute over whose land it was on.

“But I’d met Albert, the local Bougainville Revolutionary Army commander. A phone call, a quick drive to Albert’s nearby village and an hour later we were walking through the jungle with Albert in the lead — local authority and a very big bush knife!”

“It’s got some interesting archaeological sites and some very early Stone Age rock paintings that a friend of mine says are really quite impressive. But there’s no particular reason to go there — you have to be a bit crazy.”

“There is a very good reason why no one is going there and yet it’s got such potential if only they could sort out their problems.