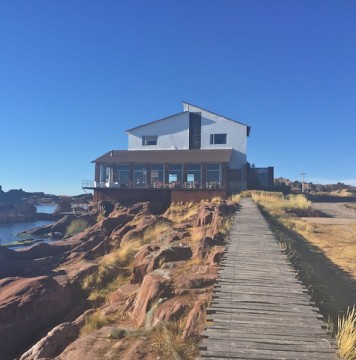 Antonio lives on his own private island in Lake Titicaca, Peru, with his wife, their five kids, two daughters-in- law and two grandchildren. They are part of the Uros tribe, and like the other 2,000 members of their tribe they built the island they live on with their bare hands. There are over 40 of these floating homes on the lake. Made from tortora reeds, they look idyllic, floating in the shallow waters some way off the shore. It certainly makes for great photos and they are the biggest tourist attraction in the area.

In contrast, the sprawling city of Puno, on the edge of the lake, isn’t much of a draw, but serves as a handy and affordable base from which to explore. A property tax is levied on completed buildings, so most of the residents avoid the tax by simply not finishing their homes. Metal girders stick out of the tops of buildings, there are piles of cement on the pavement – the city looks like a construction site. In some parts it looks like it’s been the victim of an air raid. To see Lake Titicaca in its best aspect, continue past Puno, along the road that skirts the water, until the city is lost and all you can see is the deep blue lake and the snow- capped Andes. 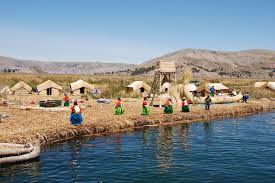 At 3,811m Lake Titicaca is the world’s highest navigable body of water and the largest lake in South America – it’s 15 times the size of Switzerland’s Lake Geneva. And even though you can’t see it standing on the southern shore, on the opposite side lies Bolivia. There is some debate about the origins of the Uros people. They are said to be the descendants of the first Andean settlers and were living on their floating islands before the Incas came along. Local legend has it that they existed before the sun, when the Earth was still dark and cold. This is apparently how they got ‘black blood’, allowing them to survive the harsh Andean climate and its freezing temperatures. It certainly gets cold on the lake. It might be 20 degrees Celsius in the day, but come nightfall it drops below zero.

Antonio used to live on a floating island with his brothers. He says somewhat elusively that things got ‘difficult’ – siblings are the same the world over – so he built his own island about 500m away. Both he and his brothers supplement their income by entertaining tourists. Their parents, less keen to receive international visitors, live deeper into the reeds.

Life on these islands is all about the tortora, a cattail type rush that is native to the lake. These reeds form the basis of the floating island. The ones at the bottom slowly rot, so every two weeks a new layer is spread over the top. You can tell if an island is new because the surface feels springy, giving a bounce to your step, while the islands over 10 years old are more stable.

But that’s not all the reeds are used for. The huts on the island are built from tortora and the white bulb at the bottom is eaten (it’s high in iodine) and also used to make tea. They are a central part of the landscape, too. When asked about what it’s like to live in such a small community, Antonio coyly reveals that when he and his wife were dating they used to take a boat into the reeds for some private time.

An afternoon spent pottering about the floating island is intriguing, and though there is an element of the tourist trap, with boatloads of tourists herded on to the islands and various handicrafts for sale, it’s still an experience like no other. Some intrepid travellers have even been known to spend several months with the Uros people but there’s no doubt living there would be tough. Freezing temperatures and an outdoors toilet (er, think off the edge of the island) aside, the remoteness and isolation would be harsh. Antonio’s eldest son has moved to Lima and makes a living selling handicrafts, but that’s not for everyone in the family. One of the younger sons visited his brother for a season and says life in the city is chaotic and he has to work until 11pm. There’s no chance of that on Uros island – when the sun goes down there’s no light and nothing to do except go to bed.

Besides the Uros islands, there’s plenty to keep you amused in the immediate vicinity with trips to archaeological sites such as the giant cylindrical funerary towers at Sillustani, a visit to Puno’s weekend market, cycling through the fields of plateria and rafting through the reeds. If you’ve got at least five days to spend at Lake Titicaca, it’s also worth considering one of the full-day excursions across the lake to Bolivia, to visit some outstanding archaeological sites – Tiwanaku is a Unesco World Heritage Site with buildings dating back to 1580BC and the Isa de Sol is a car-free paradise with pre-Columbian ruins. If all that seems like too much effort, just enjoy a sundowner beside the lake and lazily ponder whether Lake Titicaca really is the site of the lost city of Atlantis.

For those looking for a little more luxury, Titilaka Hotel is tucked away on a secluded peninsula on the shores of Lake Titicaca. The property is truly remote, with no chance of light pollution to spoil the gob-smacking view of the Milky Way at night. Each of the 18 rooms has a knockout view of the vast expanse of lake. The décor is contemporary with touches of local heritage – think bright, bold textiles against funky furniture and raw prefinished wooden floors. Huencaya Community, Distrito Plateria, Chucuito Peninsula, +51 17 005 106; titilaka.com. Double rooms from $7,000 a night (including meals, drinks, snacks and most activities).