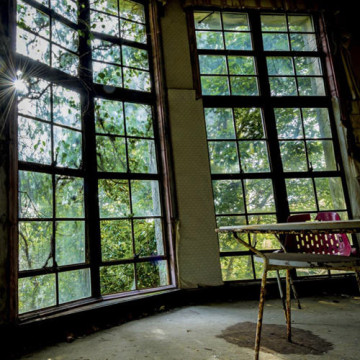 In the development boom across Southeast Asia, many skyscrapers, school buildings and even whole villages have been abandoned to the march of time. While these deserted megaliths may be eyesores to some, to others they represent a captivating window into culture and history. Urban Exploration or Urbex, is fairly edgy—you can’t trespass into derelict spaces without some risk involved— but that hasn’t stopped it becoming a global phenomenon. The investigation of abandoned, often inaccessible, built environments, is particularly popular in Japan, where it’s known as haikyo, literally translated as “ruins.”

Most of the buildings of interest in Japan are less than a century old, often small, and usually in good condition. “Nothing has been stolen. Objects from the past can still be found along with the memories they hold,” says Jordy Meow, a photographer who lives in Tokyo and caught the haikyo bug in early 2010. Then, there were only a handful of foreigners into Urbex, but he estimates the number of Japanese haikyoists has now grown to about 600.

Abandoned schools and derelict hospitals in particular help gin up the eerie vibe he tries to capture in his photographs. In such decay, it’s no surprise that some of the buildings lure more than intrepid photographers. “I have a Japanese friend who has seen a lot of ghosts and there are a few specific haikyo that seem to be full of them,” Meow says.

And then there are the places that deliver a real buzz: “Exploring abandoned amusement parks and mines is not just about images and emotions—you go there for an adventure and the thrill,” says the 31-year-old Frenchman. “They are excellent getaways.”

Leaving sites untouched is one of the few hard and fast rules of the mostly underground Urbex community. So while haikyo may still be on the tourism fringe, it’s breathing fresh life into aged edifices and giving the old walls new tales to tell.